Cash for Whistleblowers in the Health Care Industry

“But Call a Lawyer First”

The US government doesn’t like to be cheated. In fact, the government dislikes being cheated so much that it will pay people to tell on fraudsters that submit false or inflated bills for government services or try to avoid paying money they owe to the government. 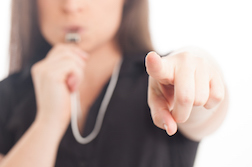 Under the False Claims Act whistleblowers are entitled to receive between 15 percent and 30 percent of the amount the government recovers in a successful fraud case.

“Whistleblowers can get a percentage of what the government recoups or reclaims for the whistleblowing of the false claims that have been submitted to the government. It can be quite lucrative for the individual to disclose what sort of fraud is going on,” says attorney Jason T. Brown from the JTB Law Group.

Attorney Brown is a former FBI legal advisor and special agent. His firm, JTB Law Group, is presently working with several individuals who have stepped forward with information about irregularities in the health care industry where hospitals, doctors, other agencies that contract with the federal government for medical services are alleged to have participated in significant fraud.

“We have several cases we are working on brought on behalf of people who have knowledge of rampant or pervasive over billing or the absolutely unnecessary procedures performed in order to bill Medicaid or Medicare. We have the cases located geographically all over the country,” says Brown.

Pervasive is an accurate word to describe fraud in the health care industry.

In a press release on its website on December 14, 2016, the Department of Justice reports it has recouped $31.3 billion “in settlements and judgments from civil cases involving fraud and false claims against the government since 2009.

Of the $31.3 billion recovered almost two thirds, some $19.3 billion, was recovered following investigations in the health care industry.

For their efforts in exposing fraud in 2016 the DOJ says $519 million was paid out to whistleblowers.

Fraud cases brought about because of information provided by a whistleblower are often called qui tam lawsuits. It’s a Latin phrase meaning ““who as well for the king as for himself sues in this matter.”

“There are all sorts of regulations in the history and case law about how to precisely initiate a qui tam action and if it is done wrong or disclosed in the wrong manner that could be an automatic bar to any recovery of whatever percentage the whistleblower would be entitled to,” says Brown.

In other words, shouting your story from the rooftops may bring down the perpetrators but there will be no cash reward for your trouble. Potential whistleblowers need to contact a lawyer with expertise in this area advises Jason Brown.

Whistleblowers should know is that qui tam suits are filed under seal. Only the parties involved know the particulars. At some point the whistleblower’s lawyer will bring the Department of Justice into the equation but the outcomes of these suits are often keep secret forever.

“Obviously, I can’t talk about specific cases we have because they are under seal,” says Brown.

“We like to take cases where we believe big damages to the government are due or cases where we feel it is a noble and just cause. Those are cases that call for us to step in to prevent harm to people who are getting unnecessary medical procedures and situations like that,” says Brown.

There are some exceptions to secrecy rules. If the DOJ wants it to be known, as a deterrent to others, it may make some of those settlements known.

For example, the DOJ press release from December 14, 2016 named several high profile companies that were found to have defrauded the health care industry. Those companies included the following.

• Novartis Pharmaceuticals Corp. paid $390 million based on claims that the company gave kickbacks to specialty pharmacies in return for recommending Exjade, an iron chelation drug, and Myfortic, an anti-rejection drug for kidney transplant recipients.

More Healthcare Fraud & Whistleblower News
• Tenet Healthcare Corp., a major hospital chain in the United States, paid $244.2 million to resolve civil allegations that four of its hospitals engaged in a scheme to defraud the United States by paying kickbacks in return for patient referrals. Tenet paid an additional $123.7 million to state Medicaid programs, and two of its subsidiaries pleaded guilty to related charges and forfeited $145 million, bringing the total resolution to $513 million.

Over the 7 years the government has paid more than $4 billion in whistleblower awards.

“As a former FBI legal advisor and special agent my firm is used to interfacing with government. We definitely have a great footing to be able to navigate the system. Knowing the mechanics of the government puts us in good position to pursue these cases,” says Jason T. Brown.

And there is no shortage of cases to pursue.

Click to learn more about LawyersandSettlements.com
LawyersandSettlements.com is an online news and information site for the general public and legal community. As a legal news resource, we have emerged as an independent & trusted voice. We provide detailed and quality information on various lawsuits filed including Consumer Frauds, Financial Cases, and Insurance Cases.