Rooting out healthcare fraud is a top priority for the Department of Justice (DOJ) and on July 17, 2017 the DOJ announced a massive $1.3 billion crackdown on healthcare professionals involved in schemes to defraud Medicare, Medicaid and healthcare services for US veterans and their families. 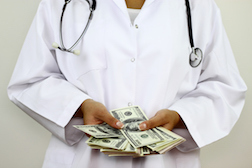 The DOJ charged 412 healthcare professionals, including 115 doctors, nurses, pharmacists and other licensed professionals across 41 federal districts with making false claims. The DOJ alleges perpetrators wrote and issued prescriptions for “medically unnecessary prescription drugs” and “compounded medications that often were never even purchased and/or distributed to beneficiaries”. The DOJ also alleges individuals were involved in “the unlawful distribution of opioids and other prescription narcotics”.

The July operation was the largest healthcare fraud enforcement operation in DOJ history.

“They didn’t name the whistleblowers in the press release or indicate that there were whistleblowers involved but I am confident that along the way there had to be people that co-operated with the government in such a significant investigation,” says Jason T. Brown, an attorney and a former special agent and legal advisor with the FBI.

Whistleblowers (or relators as lawyers call them) who come forward with information about schemes to defraud the government are entitled to as much as 25 percent of the amount recovered by the government. It can amount to millions of dollars depending on the circumstances.

Lawyer Jason T. Brown is an expert in the area of Whistleblower law. Brown and his firm the JTB Law Group have worked with dozens of individuals that come forward to report healthcare fraud, SEC fraud and other types of fraud schemes.

Blowing the whistle can get very complicated and Brown advises anyone with a plan to tell-it-all should first seek out a lawyer. Wait too long or go to the FBI alone and they miss a chance to claim a whistleblower award, or even worse, they risk being found complicit in the fraud.

Whistleblower lawyers practice absolute discretion and rarely, if ever talk about specific cases they might be working on. That includes Jason T. Brown and the JTB Law Group.

If there were whistleblowers in the big DOJ sweep – they should have consulted a lawyer.

“If they wanted to get an award it is almost mandatory they work through counsel. There are a lot of courts and rulings that indicate you can’t file these actions Pro Se (on your own). There is a lot of risk filing Pro Se. Sometimes people just co-operate with the FBI independently in filing an action either for the good of the system, or because they are jammed up and have to co-operate. Then they will not get an award (for whistleblowing).”

Whistleblowers are often people who are “well-placed in an organization” says Brown. “They don’t have to be high up, just well-placed.

“The shame is that a lot of people are conscious on a certain level that it is going on but they don’t come forward until they start having arguments with the company,” says Brown. “By then they may be complicit in the corruption. It is also advisable to speak to counsel early to figure out what your options are because you are passively allowing that corruption to happen you may very well be picked up one day as part of that process.”

Brown’s firm gets calls almost every day from someone with knowledge of healthcare fraud in the US. He estimates there may be as much as $100 million a year in fraudulent activity in the healthcare system. Some of that is very likely related to the current Opioid Crisis that is plaguing Americans.

“Look at how outrageous the conduct was in the recent big DOJ takedown,” says Brown. “There was over prescribing of opioids in a quantity that healthcare professionals know is not just for personal use but is for distribution. And one of the outfits in Florida were paying people, bussing them down to Florida, and paying for housing so they can keep them on the opioids.

More HEALTHCARE FRAUD News
“There are kickbacks going on, billing for services not rendered,” says Brown. “And we see ‘up coding’ all the time. That’s when we see ‘an impossible day’ where the doctor up-codes everything. For example the doctor sees a patient for 15 minutes and then up codes it to an hour. If you go back and look at the doctor’s records you will see they saw 28 hours’ worth of patients in a single day.”

“This fraud hurts everybody,” says Brown. “Cracking down is going to help us save costs ultimately in the health care system and awards go primarily to the government so this is a victory for the taxpayer.”

And, of course, some of that recovered money often goes to the person who blew the whistle loud and clear.

Posted by
Griselda Jackson
on August 9, 2017
What about the; legitimate; patients, who suffered, in the way of being denied; legitimate; medication, while Government closed down, and/or arrested these Healthcare Professionals?
Posted by
aurelia white
on August 6, 2017
A local gastroenerologist here in California has committed healthcare fraud by billing Medicaid for services he did not render to me during an ERCP procedure he performed on me on September 12 2015 to remove gallstones from my bile duct. Because of his laziness I had to have the ERCP done 2 more times in 2016 and after the last procedure I got sepsis & almost died! I need your help
Posted by
Lee Horowitz
on August 6, 2017
Big time fraud is going on by private doctors receiving VA finds for private care under the VA Choice Program and also billing the 100% disabled veterans medicare as well ..This is fraud and was reported to medicare fraud twice and the VA choice program twice. Both did nothing . The Medicare fraud unit nor the choice program fraud unit nor the VA IG office never ever called me or contacted me This codtor has many contracts under the VA choice program and is billing veterans medicare as well double billing. Medicare almost a year after reporting such was shocked that an investigator never contacted me !!Medicare claimed they sent the billing office of the doctor a letter which after 1 year the doctors office refused to answer . Medicare and the VA Choice program have no fraud prevention whatsoever between the two systems and I suggested they did as a government suggestion and they refused

All this appears for whistleblowers to be a futile effort to ever report fraud at the VA choice program and medicare fraud by doctors .

Click to learn more about LawyersandSettlements.com
LawyersandSettlements.com - A trusted, independent legal news provider bringing quality news and information on legal cases and lawsuits filed in the United States of America to its readers since 2002. Over 650,000 legal help requests including Whistleblower Cases, and Drugs & Medical Cases have been forwarded to lawyers all across to the country.