A former employee of Cooper Health System in New Jersey has filed a whistleblower healthcare fraud lawsuit after the paramedic claims he was fired for raising concerns about poor treatment of patients, potential billing fraud and other allegations related to regulatory violations. 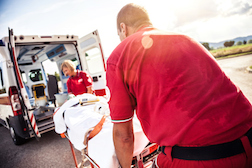 The stated reason for his termination, however, was falling asleep on the job and having missed a call. Plaintiff Michael Tallant disagrees, saying that he had fallen asleep between calls because he was feeling ill on the day in question. Tallant also claims that it’s common practice for paramedics to catch a few winks during down time between calls. In contrast, Tallant alleges that he was suspended, and then subsequently terminated from his position at the Camden facility following the submission of his second complaint alleging issues with compliance.

According to Court documents, Tallant asserts he noted several examples of noncompliance “almost immediately” upon the start of Tallant’s tenure with Cooper Health in 2015. Tallant’s allegations include missing equipment, such as fire safety gear and maps. Tallant also noted at least one incident where narcotics were not properly secured and locked, or so it is alleged. Tallant submitted a complaint about the alleged regulatory failures by way of an online complaint system maintained by Cooper Health.

Tallant also alleges an observation he made in the spring of 2016 that patients were not ventilated properly, together with allegations that employees were being too rough with patients. Following a complaint to his superiors, Tallant noted that the work environment became “increasingly adversarial and hostile,” towards him.

Tallant’s healthcare fraud lawsuit also asserts that in the summer of 2016, Tallant learned that Cooper Health was billing Medicare / Medicaid for the dispatch of both basic life support, and advanced life support trucks to a call when only one, or the other of the two vehicles had been in actual fact, dispatched – or so it has been alleged by the whistleblower. The plaintiff asserts that when he made his allegations of potential billing and healthcare fraud known to his superiors, he began hearing rumblings that the clinical coordinator at the facility was attempting to have Tallant fired, or so the plaintiff alleges.

It was a year ago, in September 2016 that Tallant asserts he filed a subsequent complaint with the internal compliance office of Cooper Health, with a similar report filed with the Office of Emergency Medical Services for the State of New Jersey.

More HEALTHCARE FRAUD News
It was two weeks after that, Tallant asserts, that he arrived at work feeling particularly ill, fell asleep and missed a call. His colleagues attended to the call “without delay,” his whistleblower lawsuit asserts. Tallant alleges he was subsequently suspended for missing a call, and then terminated from his job.

Cooper Health maintains a ‘no sleeping’ policy for paramedics as they await calls. However, Tallant asserts the policy was regularly violated by several other employees on an ongoing basis. Thus, Tallant asserts he was let go due to his observations of alleged wrongdoing at Cooper Health, and his reporting of same.

Click to learn more about LawyersandSettlements.com
LawyersandSettlements.com is an online news and information site for the general public and legal community. As a legal news resource, we have emerged as an independent & trusted voice. We provide detailed and quality information on various lawsuits filed including Whistleblower Cases, Consumer Banking Issues, and Consumer Frauds.