The Department of Justice has announced that Olympia Therapy, Inc. (Olympia), an Ohio nursing home, and its management service provider, Provider Services, Inc. (Provider) have agreed to settle a healthcare fraud lawsuit  brought by Vladimir Trakhter, a former Olympia employee. The case puts a uniquely human face on the damage done by Medicare fraud. 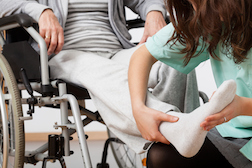 Trakhter, who was employed to provide skilled physical therapy services to the nursing home’s residents, filed suit as a qui tam whistleblower on behalf of the United States under the False Claims Act. The lawsuit describes a fraudulent billing scheme that entailed medically inappropriate overtreatment and mistreatment of patients, all for the sake of a higher Medicare reimbursement rate. The abuse described in the complaint targeted elderly, infirm patients who also suffered from cognitive deficits. They could not defend themselves from their “caregivers” and were unlikely to complain. Cheating Medicare is bad, but this was stomach-turning.

In one of the fifteen situations described, a patient with multiple severe back problems was assigned 75 minutes of therapy. He was overworked and attempted to decline treatment but was required to continue. Shortly after the therapy session, he was diagnosed with a compression fracture.

Another patient presented with a weak heart, mood disorder, kidney failure and low endurance. He was overworked, exhausted and futilely tried to refuse treatment. He argued with the two therapists administering the “therapy,” went into cardiac arrest and died.

More HEALTHCARE FRAUD News
The other human face of this story is, of course, Vladimir Trakhter’s. The False Claims Act recognizes that the employees of healthcare organizations are often in the best position to know about the healthcare fraud being perpetrated by their employers. Enforcement of the law (and in this case, the protection of vulnerable patients, as well) depends on the willingness of individuals in the workplace to come forward with information. The False Claims Act, consequently, provides protection from retaliation and the potential of financial reward for whistleblowers of up to 30 percent of the government’s total recovery. However, the process for filing and pursuing a claim under the law is very detailed, and the qui tam whistleblower must be represented by an attorney.

Under the terms of the settlement, Olympia, Provider and their executives agreed to reimburse Medicare $19.5 million and pay $2.9 million to Trakhter. In addition, the parties agreed to enter into a five-year Corporate Integrity Agreement designed to increase accountability and transparency in order to avoid and promptly detect fraud and abuse in the future.