Prepaid Debit Cards "a Rip Off"

Although prepaid debit cards may seem like a fantastic idea for people with poor credit, consumers are learning that the fees can be exorbitant. Shirley S. says she used a Green Dot debit card for a few months, until she realized she was paying too much in fees and closed the account. 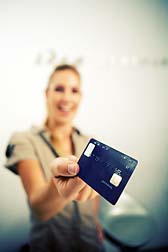 Shirley has had bad credit since college, when she got a college loan. She thought the prepaid debit card would be a good way to improve her credit.

"I went to Rite Aid to get the card," Shirley says. "I think it was about five dollars to activate it and you have to call the company and they activate it for you. After that, I used it for a while, but I didn't really know what charges I was paying. I just found I kept reloading it and reloading it. I think I paid a lot in fees though—at least $100."

In fact, according to greendotonline.com, Shirley would have been charged a fee of up to $4.95 every time she reloaded the card at a retail location. She would also have been charged a monthly fee of $5.95, unless she made at least 30 purchase transactions per month or loaded $1000 on the card every month.

More PREPAID DEBIT CARD News
What's more, Shirley recalls that when she was using the card, the fees she was paying were higher than they are now.

"I would phone customer service and ask about the fees," Shirley says. "One time, the man I spoke with said they were lowering the [monthly] fee to $5.95 because so many people were using the card. I think at one point it was almost $10 a month.

"I thought the fees were too high. I kept reloading the card, but every time I did, they took money from me. I think I had that card for about six months and it wore me out so I closed the account. I wouldn't go back to it.

"I think these cards are a rip-off. It's like they cheat from people who can't get credit. There needs to be regulations on these fees. I guess these cards can be good and help people to be eligible to buy goods and services, but they shouldn't cheat people."

Posted by
Peter Bohning
on October 30, 2018
I got one of these cards to use online and then they claimed they couldn't verify my information after something went wrong on their site and that I can't use the card online.

As long as companies like Greendot are out there, we cannot pretend that we have a government.

Posted by
crystal ofiild
on February 16, 2016
I got my tax refund via Jackson Hewitt American express. I had 3000 + that I needed access to mostly for bills. So I go to atm and 500$ max could be withdrawn at once. So I withdrew 500$ 6 times. Accumulate fees of of 20$ 4$ for every $500. Ten I couldn't get a prepaid visa. American express is harder to use than visa so I had gotten 4 $500 green dot prepay visa at walmart. But I had my boyfriend do it while I was at work. Well I everything was fine I paid bills went to restraunts withdrew cash numerous times. But I set aside 1 500$ because I was paying my attorney to finalize my divorce. It is $250, I go to use my card and I am told I can't pull cash to pay for divorce. And how do the customer service ppl know my maiden name for a prepaid card .i didn't sign anything. I definitely didn't agree to have my money dangled over my head so they can have a higher interest rate. What would that be on 500$? Like 25$ max? Instead I'm forced to stayed in a damaging marriage and have to borrow money from friend to suffice til payday. So when I do get other card I owe friend and gotta wait til next year to get divorce finalized. I lost my boyfriend. I woulda paid 25$ to avoid this nightmare
Posted by
Mark Stancil
on February 5, 2014
This is the response a sent to OPT+ after all their Untruthful Promises.;

Your TOTALLY WORTHLESS CARD
will have yet another complaint on the Internet for everyone to see. I have all day to set around and load up every site I find EXPOSING the fraudulent claims of "Customer Service" that I can report you too. Please, go ahead and destroy my files. I have wasted so much gas, driving over 30 miles twice, trying to rectify these problems. The embarrassment and conditions that I've been through are YOU wasting MY LIFE.
I have spent HOURS on the phone with YOUR "Customer Service Reps",and I use that term lightly, with only apologies for Your inadequacies and Lack of any Real Customer Service of any type. Saying I'm sorry a thousand times does not repay or fix the problems with your Company and the OPT+ Card.I'm posting these words exactly as I'm copying them here for every site I can find to help people stay clear of your Worthless Company.