LAWSUITS NEWS & LEGAL INFORMATION
Home Page >> News Articles >> “If I Knew about Granuflo My Son Might B..

“If I Knew about Granuflo My Son Might Be Alive Today”

News that a Granuflo lawsuit was filed by a New York woman whose relative died allegedly after using the dialysis product brings some hope for Carolyn - her son died after receiving Granuflo at a DaVita Center. 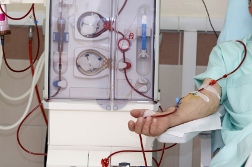 “Although my son had diabetes and renal failure, his urologist told us that he could live many more years on dialysis,” says Carolyn. “We did some research and my son asked for my opinion. Although not all reviews about dialysis are positive, I found out that many people have lived decades on dialysis, as long as you get the right treatment.

According to Carolyn and more than 460 Granuflo complaints alleging serious cardiovascular injuries due to Granuflo and another acid concentrate called NaturaLyte made by Fresenius Medical Care, their loved ones did not receive the right dialysis treatment.

“My son suffered low blood pressure during his very first treatment with Granuflo,” says Carolyn. “The technician put him in a wheelchair and I drove him home - my son was so weak and dizzy. I was really concerned because he was supposed to have dialysis treatment at the DaVita Center three times a week. We went back on Wednesday and his blood pressure plummeted again, but he didn’t really have a choice.

“My son would be on the machine sometimes up to four hours, sometimes only two hours. The second week the same thing happened but he kept going for another few months, until he had a massive stroke during dialysis that left him brain dead. I wasn’t there with him that time and I will always regret that.”

Carolyn says that nobody told her about the dangers of Granuflo or the Granuflo recall. The recent lawsuit filed by Janice Hill claims that Granuflo, which substitutes for human kidneys by cleansing and removing waste from the blood, causes metabolic alkalosis, which in turn causes an increased risk of cardiopulmonary arrest and sudden cardiac death.

“My son was kept alive with no brain activity for eight months before they pulled the plug,” says Carolyn, crying. “I’ve worked in the clinical nursing field for 40 years so I am familiar with a lot of things, but I couldn’t figure this out. The light didn’t come on until just recently when I read about the Granuflo recall. I am really beating up myself now, because if I had known sooner, my son would most likely be alive today.

More GRANUFLO RECALL News
“I have an investigative nature and normally I wouldn’t have let his low blood pressure issues get this far but he was so ill; I couldn’t see anything other than what was in front of me.

“Talking about my son is part of the grieving process; I want to tell the world what happened to my child. Now that I know about Granuflo I want other people to know that low blood pressure with dialysis patients is the red flag. I wish someone had told me when my son went through it.”

In her lawsuit against Fresenius, Janice Hill alleges breach of express warranty, breach of implied warranty, negligence, strict liability and failure to warn, defective design, failure to adequately test, failure to conform, negligent misrepresentation and fraud. According to the complaint, she is seeking “an unspecified judgment, plus costs, interest and other relief the court deems just.”