Another GranuFlo Lawsuit Filed against Fresenius

Another GranuFlo lawsuit has been filed against Fresenius, alleging a patient was harmed by alkali dosing errors linked to the product. Recently, a court agreed to consolidate Fresenius lawsuits into a multidistrict litigation for pretrial proceedings. 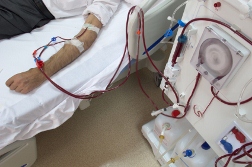 The latest lawsuit was reportedly filed by Ronnie Glasper (court documents found online at cdn.aboutlawsuits.com), and alleges Fresenius hid its knowledge of the risks associated with the use of Naturalyte and/or GranuFlo from the FDA, the public and the medical community. Furthermore, the lawsuit alleges Fresenius “negligently and/or fraudulently represented” that tests on the products found them to be safe for their intended uses, and claims that the company did not perform adequate testing to determine the risks associated with Naturalyte or GranuFlo.

According to the lawsuit, Ronnie Glasper was prescribed either Naturalyte and/or GranuFlo during dialysis treatments at a Fresenius Medical Care center in Louisiana and ultimately suffered a heart attack and stroke.

The lawsuit alleges that on November 4, 2011, Fresenius sent an internal memo to certain Fresenius medical directors and physicians warning about the severe health risks associated with Naturalyte and GranuFlo, but did not warn the FDA about the risks, which were reportedly identified in a case-control study on hemodialysis patients. The memo allegedly noted that the case-control study found that “borderline elevated pre-dialysis bicarbonate levels and overt alkalosis were associated with six to eight fold greater risk of cardiopulmonary arrest and sudden cardiac death in the dialysis facility.”

More GRANUFLO RECALL News
Glasper alleges, however, that even though the internal memo was sent to some medical facilities, it was not sent to the facility where he was treated - a Fresenius medical center - nor was it sent to his attending physician.

Some patients who received Naturalyte or GranuFlo reportedly suffered from high blood serum bicarbonate levels, which can result in death, cardiopulmonary arrest, cardiac arrhythmias, stroke and other serious health problems.

Lawsuits have been filed against Fresenuis alleging patients were seriously harmed by the use of GranuFlo and Naturalyte. Eleven federal lawsuits were reportedly consolidated to MDL 2428 (In re: Fresenius GranuFlo/NaturaLyte Dialysate Products Liability Litigation) in the US District Court for the District of Massachusetts.
READ ABOUT GRANUFLO RECALL LAWSUITS