Regardless of the apparent posturing by members of the Fresenius Medical Care (Fresenius) legal team with regards to many a GranuFlo lawsuit, it appears extraordinary that in the midst of the present information age that allows for news and data to be transmitted globally in mere nanoseconds, a company cannot (or allegedly chose not) to communicate a problem surrounding Dialysate Concentrates Hemodialysis. 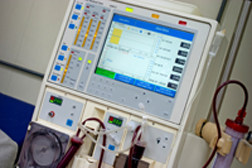 GranuFlo and NaturaLyte are two products manufactured by Fresenius - which also happens to be the largest manufacturer of dialysis machines and the largest operator of dialysis clinics in the country - integral to the process of dialysis for patients suffering from renal disease or improperly functioning kidneys. Chemicals used to facilitate the dialysis process represent a carefully controlled dance that can mean the difference between a successful dialysis and grievous health issues that can result in death.

According to The New York Times (6/14/12), incidents of cardiac arrest occurred in no fewer than 941 patients in one year alone. In 2010, that’s the number of patients who had issues while undergoing kidney dialysis in Fresenius clinics in that year alone.

The problem appears to be Alkali Dosing Errors stemming from the fact that GranuFlo - a powdered concentrate that has to be mixed by the end user before being administered to the patient - is more potent than competing products and can lead to higher levels of bicarbonate in the blood. Bicarbonate is crucial to the dialysis process, in that the alkaline-based bicarbonate neutralizes acid that builds up in the blood.

The problem, according to some studies, is that too much bicarbonate can potentially lead to heart problems. The New York Times reported that doctors, unaware of the increased potency of GranuFlo, had not taken the possibility of higher bicarbonate levels into account when prescribing bicarbonate separately in order to achieve the right mix of bicarbonate to clean the blood more effectively.

In Dialysate Concentrates Hemodialysis, too much bicarbonate can potentially lead to the cardiac anomalies Fresenius observed in 2010.

So Fresenius, in an internal memo dated November 4, 2011, alerted doctors and health care providers in its own clinics about the potential danger surrounding GranuFlo and NaturaLyte. But according to many a GranuFlo lawsuit, the manufacturer failed to communicate those concerns to other non-Fresenius clinics.

It was only when the internal Fresenius memo was leaked to the US Food and Drug Administration (FDA) - and a Fresenius Medical Care recall ensued - that Fresenius undertook a similar communique to other clinics and health care providers.

In today’s world, a simple tweet would have done the trick - especially given the apparent urgency of the situation. The memo, available through The New York Times, referenced the findings as “troubling,” and urged Fresenius doctors and clinicians to take corrective action. “This issue needs to be addressed urgently,” the memo read.

And yet, according to The New York Times report, the products division of Fresenius did not think a notice to outside clinics was necessary due to a lack of specific adverse event reports associated with the memo.

According to The New York Times report, the chief medical officer for Fresenius North America noted that the findings of the internal memo were too preliminary to warrant publication, which, according to the office of the chief medical officer, was the only way in which the company could have communicated the findings to the public at large. In an interview, Dr. Franklin W. Maddux stood by his decision not to release the memo outside of the Fresenius community. “I felt that [the memo] was not in a condition for general consumption.”

The FDA disagreed. Once the memo was anonymously leaked to the agency (it is alleged that Fresenius made no effort to contact the FDA forthrightly), it wasn’t long before the federal drug regulator questioned the company about the issue, and in May of last year issued a NaturaLyte GranuFlo recall.

Various health advocates have disagreed with the Fresenius position that the 941 incidents of cardiac arrest in 2010 did not warrant wider publication of the problem. “If the data was sufficient to warn their doctors, then all users of the product should have been made aware of it,” said Dr. Thomas F. Parker III, chief medical officer at Renal Ventures, a dialysis chain that uses Fresenius products. And the FDA’s own director of compliance for the agency’s medical devices division expressed his dismay over the turn of events.

“Personally,” said Steven Silverman, in comments published in The New York Times, “I’m troubled by the fact that Fresenius on its own initiative didn’t notify its entire customer base of this particular concern,” he said.

That issue appears to be the thrust of many lawsuits concerning NaturaLyte and GranuFlo, and not the Alkali dosing errors stemming from a more potent GranuFlo and NaturaLyte than doctors had bargained for, and the increased levels of bicarbonate that ensued.

To wit, this issue of when Fresenius first knew about the problem and its alleged lack of effort in communicating grievous concerns to doctors, clinics and patients outside of Fresenius’ own clinical jurisdiction appears to lie at the heart of the angst.

More GRANUFLO RECALL News
And yet, last month, lawyers representing Fresenius in lawsuits filed a petition with the US Judicial Panel on Multi District Litigation, noting that “The plaintiff’s claims will fail on their merits because the plaintiffs cannot show that Fresenius’s products are unreasonably dangerous or that Fresenius failed to provide adequate warnings and instructions to the intermediaries who used GranuFlo and Naturaliste to treat dialysis patients.” Fresenius appears to have had no problem with that information being released in a timely fashion.

Lawyers for the plaintiffs point to the hundreds or even thousands of patients who may have been exposed to the allegedly problematic GranuFlo and NaturaLyte products while Fresenius tarried. It is further estimated that as many as 125,000 patients in non-Fresenius clinics may have been exposed to the Fresenius-manufactured products, with plenty of opportunity for that to happen. Patients in need of regular dialysis typically undergo the procedure three times per week.

Thus we have not heard the last of the GranuFlo lawsuit file.
READ ABOUT GRANUFLO RECALL LAWSUITS