It's like the Wild West when it comes to products such as FRS healthy energy drink. Dietary supplements still don't need to be proven safe and effective before hitting the shelves. And more often than not, these products are falsely advertised. If the FRS products actually lived up to the company's claims, why hasn't somebody won a Nobel Prize by now? 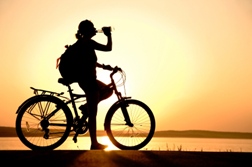 Unlike drug products that require FDA approval before they are marketed, dietary supplements are regulated by the manufacturer—an issue that critics and consumer advocacy groups have been fighting since 1994, when the Dietary Supplement Health and Education Act (DSHEA) was signed into law by then-President Clinton.

Here is the FRS miracle claim:

FRS Healthy Energy products – can improve endurance in healthy, active people without regular exercise training… quercetin [a powerful antioxidant found in foods like blueberries, red apples and grapes] can positively impact the fitness ability of healthy, active people who aren't involved in a regular exercise training program… Quercetin has been shown in vitro and in animal studies to have widespread health and performance benefits resulting from a combination of biological properties, including antioxidant and anti-inflammatory activity.

The FRS company is just one example of an ongoing problem regarding how supplements are regulated. If a manufacturer can claim that the product is a dietary supplement, it can avoid the hoops and whistles of the FDA. But FRS claims to have beneficial health effects on par with a drug or medication, without being subject to scrutiny and stringent clinical trials—and that must incense pharmaceutical companies whose products don't get the green light.

What determines a dietary supplement versus a drug? What needs prior approval and what does not? These questions need to be better addressed by regulators because the public safety is at stake. Even if the FRS healthy energy drink does not need FDA approval, what is required before the company can make a health-related claim?

On its website, FRS makes a big deal about its scientific backing, which is a bit of a stretch, to put mildly.

Read the fine print: In some cases FRS cannot support its claims at all, and other studies are just experiments, not clinical trials. With only 12 or 20 people involved in the FRS "clinical trials," which are publicly displayed on their website, you end up with a very weak correlation. These so-called trials do not prove anything about causation; neither do they mean you will get the same result if you run the test again.

But the company runs with that. They are manipulating pseudo-science, like a high school science fair experiment.

The FRS argument is similar to Airborne, a product marketed as something you can take that keeps you from getting sick in crowded environments, such as a plane. Oprah, Howard Stern and Kevin Costner all endorsed Airborne, just as FRS relies on Lance Armstrong (who just happens to be on the FRS Board of Directors) and other sports celebs. The company also said it had scientific evidence to support its marketing pitch.

But Airborne ended up settling a civil case for more than $20 million, which was ignited by an ABC News Report saying that the clinical trial the company offered as proof of the product's effectiveness was highly dubious (yet another parallel to FRS claims). The Center for Science in the Public Interest, an advocacy group that helped bring the lawsuit, contended, "There's no credible evidence that what's in Airborne can prevent colds or protect you from a germy environment."

Then the FTC went after them and Airborne had to settle with them as well. Walgreens also settled out of court because it sold a knock-off product of Airborne, called Walborne, which made the same health claims.

More FRS HEALTHY ENERGY News
According to DSHEA, "A firm is responsible for determining that the dietary supplements it manufactures or distributes are safe and that any representations or claims made about them are substantiated by adequate evidence to show that they are not false or misleading. This means that dietary supplements do not need approval from FDA before they are marketed. Except in the case of a new dietary ingredient, where pre-market review for safety data and other information is required by law, a firm does not have to provide FDA with the evidence it relies on to substantiate safety or effectiveness before or after it markets its products."

If there were a shred of truth to this miracle drug, why aren't the real scientists all over it? And isn't it about time regulators looked out for the public's health and safety and regulated these so-called supplements?