Susan is in bad shape and she blames it on Fosamax. “I told my prescribing doctor that I wanted to research Fosamax side effects before taking it,” says Susan. “He told me that I had no choice because I was on welfare and it is the only drug covered by state aid.” 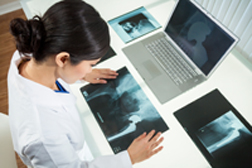 If Fosamax is indeed the only osteoporosis medication covered by the state, that must greatly help Merck’s sales of its osteoporosis drug. It certainly hasn’t helped Susan’s osteoporosis. She broke two hips in 2011, at the age of 50. “That’s when my health went to hell in a handbasket,” she says. “It wasn’t until after I had my first hip replacement that I found out about my bone issues.

“I was really surprised because I worked on the Alzheimer’s ward in a long-term care clinic for years. I did a lot of walking and I sure got beat up a lot - literally by the patients - but I never broke any bones. Then I wound up in hospital at the end of 2010: I had heart surgery and they told me that I have COPD. January rolled around and one day I passed out, right out of the blue. I think it was because of all the meds. I had physical therapy on my legs but nothing was broken.

“About two weeks later, I was walking around my sister’s house and all of a sudden it felt like someone hit me with a bat on my right side. I fell to the ground. Someone took me to ER - my right hip was broken.”

They also told Susan that her hip bones were “soft.” She had a partial hip implant (she calls it the “ball and stick”) and spent a week in rehab. But the entire time she was there, Susan complained of pain in her left groin area. Finally, she got around to telling her orthopedic surgeon. He ordered x-rays, and turns out, she was walking around with a broken right hip.

“I had another ball and stick - that is exactly what it feels like in my body,” Susan explains. “And then it was back to rehab. They said my osteoporosis T score was way past 14, which is severe. I also have four fractures on my vertebrae and nothing can be done about them, likely from my fall.

“Next up, I was referred to a rheumatologist, who prescribed Fosamax to supposedly help with my osteoporosis. As I said, I didn’t have much choice; even after reading about Fosamax fractures, I still decided to take it. He just told me to drink lots of water with a 70mg pill once a week, and don’t lie down for 30 minutes afterward.

“I was on it for six months. Please just throw me in front of the bus! Now every joint in my body hurts so bad. I took Fosamax every Saturday and I could barely walk for the next three days - I was in so much agony. And my throat tasted like rust. I was so paranoid, I drank four bottles of water right after taking the pill.

“After about six months, I came back home to Ohio (I was out of the state with my family for a year). I was having trouble swallowing and could barely eat food. I drank water and it would shoot out of my nose. Something was definitely wrong so I saw another rheumatologist.

“She told me to stop Fosamax immediately. In the meantime, my family doctor sent me to a gastroenterologist who said, ‘Dear god, you have such major erosions in your esophagus, throat, upper stomach and who knows where else,’ and he put me on Omeprazole, which can also weaken your bones. What a mess! (My doctor told me that these erosions are likely caused by the Fosamax: why tell me after the fact?)

More FOSAMAX News
“I know the Fosamax really messed up my throat and stomach. The residual affects are terrible. Now I have to take all these other drugs, and I had 17 teeth pulled. The Cleveland Clinic told me I had to get them pulled to avoid any infection. I am not sure if it is because of my rapidly deteriorating health or as a direct result of Fosamax jaw bone loss.

“People tell me that I should apply for a Fosamax claim. My family kept seeing Fosamax femur lawsuits on TV, and I read from so many people online who are suffering from broken jaws and bones re-breaking from the Fosamax.

“I am going back to the Cleveland Clinic this month to check on my hips. There are certain days that I need a walker, and sometimes (this sounds really dumb) when I sit down, I think my bones are coming right out of my butt cheeks and something is going to snap. I tell people they would be better off drinking battery acid than taking Fosamax - they would have a better shot of living.”

Posted by
patricia stark
on June 21, 2013
mine mom has taken all them mec and she has lot of issue.from all these things they have had her take.also has pain pump in her back refuses to take it out,and telling her now if she dose she may never walk again,i think this is wrong and she needs help.