When Deborah J. (real name withheld) first started taking Fosamax, she had no idea how serious Fosamax side effects could be. It was not until after a seemingly minor incident eight years ago that she learned about the potential link between Fosamax and femur fractures. Now, Deborah believes that her broken leg was a Fosamax fracture, brought about by the osteoporosis medication. 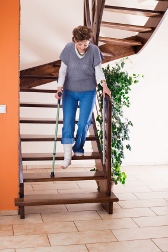 "I had a test done for osteoporosis and I was told I would be put on Fosamax because I had a bit of osteoporosis and they wanted to stop it from getting worse," Deborah says. "While I was taking it, I had an accident while in the country. My mother came to spend the weekend with me and she had a hard time walking, so I gave her a bed on the main floor and gave her a bell to ring if she needed anything and I went upstairs.

"She rang the bell at around 1:00 am and I jolted out of bed. I must have missed a step because I fell down three stairs from the second floor to the landing. It wasn't a big fall. I didn't tumble and it wasn't from high up. But I felt something bad had happened. From the way my right leg was laying there, I just knew that I had broken something. It was incredibly painful.

"My husband came out to help me and he tried to move me, but I said, 'Don't move me, I think I've broken my leg. Call an ambulance.' But we were out in the country and it was the middle of the night, so it took an hour and a half for the ambulance to get to me. I had to stay in that position on the landing for a long time before the ambulance got to me.

"It was a small hospital but the doctors were wonderful. I stayed at the hospital a couple of weeks and they did surgery—I still have the scar—to put a metal plate in my leg. The doctors looked at it and told me my femur had snapped. After a couple of weeks I was able to move back to Montreal, but I had months of physiotherapy.

More FOSAMAX News
"My bedroom is upstairs in my house, so I had to put a blow-up bed in my dining room because I couldn't walk up or down stairs. I spent two months at home in bed. I couldn't go to work, I couldn't take care of my daughter and I couldn't do anything at home. I'm lucky because I was able to hire someone to do things around the house, but to not be able to walk and to have a child and be incapacitated is awful. It was a very big disruption in our personal lives and in my work.

"About a month and a half later, I learned to walk with crutches and then later with a cane. Now I have a bit of a limp, mainly from compensating for the break. I'm lucky both femurs didn't snap when I fell.

"I read a while ago that Fosamax might cause the femur to snap. It's one thing to ski and have an accident that breaks your leg. But it's another thing to think that a medication you took to strengthen your bones might actually have the opposite effect. It makes you wonder about the drug because it was supposed to strengthen my bones. It was a terrible ordeal."