Fosamax is taking its toll, not only on those who have suffered debilitating Fosamax side effects, but it has also become a drain on the health care system. Take Shannon, for instance. A former nurse, she is now on disability benefits, unable to work. Her osteoporosis specialist blames her multiple bone fractures on Fosamax. 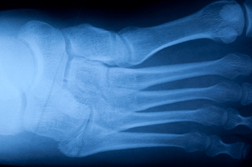 "I was prescribed Fosamax 11 years ago because I was on prednisone for Lupus," Shannon explains. "It was supposed to work as a preventative to protect my bones from the prednisone side effects." Instead, Shannon and her doctor believe the drug has caused more harm than the prednisone could have done. "Last September I simply stepped into my living room and my foot broke—I heard and felt it crack.

"I went to ER and had x-rays but nothing showed up. They sent me home with instructions to keep my foot elevated for a few days. It was the bone on top of my foot so I didn't have much swelling but I couldn't bare any weight. One week later I still couldn't walk so I went back to my doctor and this time he ordered a bone scan.

"The results of the bone scan showed four more fractures! Both femurs and my ribs, along with my foot, were fractured. We were both surprised and shocked, to say the least. I'm only 44 years old and I don't have osteoporosis. But my doctor referred me to an osteoporosis specialist anyway…

"My osteoporosis specialist, Dr. Kline, asked me if I knew why I had these fractures. I knew it was because of Fosamax because my mother recently saw a news article about it on TV. He agreed with me that the fractures were caused by Fosamax, adding that he has 13 patients with the same problem.

"I was so shocked with his remark: I find it unbelievable that this drug is prescribed without adequate knowledge of the side effects. Dr. Kline said that Fosamax should never be prescribed as a preventative for pre-menopausal women. He said it works well for osteoporosis patients, but that doesn't include me."

Fosamax is prescribed to both men and women to cure a type of osteporosis caused by taking corticosteroid medications such as prednisone for longer periods, but medical Web sites also indicate that it is used to prevent and treat osteoporosis in postmenopausal women, as Dr. Kline explained to Shannon.

"Eventually my fractures healed but I have a lot of pain and have had re-fractures (in the same places) because my bones are not re-growing on their own," says Shannon, who adds that she has been off work for nine months now; it's likely that she won't return to work anytime soon.

More FOSAMAX News
"I had another bone scan this past January and it showed another eight fractures all over my body—mostly in the front and back of my ribs. Dr. Kline was shocked with the results of this second scan. I have started taking a drug called forteo, which is an osteoporosis medication used to stimulate and form new bone—that the Fosamax stopped. But there are severe forteo side effects and now I'm dealing with fatigue, dizziness and depression. I know the latter is because of this drug, because on day four of the med, I'm crying my eyes out, then I stop taking it and I'm fine. I'm trying to make this work because there aren't any other options. I am hopeful that there will be a Fosamax lawsuit in Canada, like they are starting in the US, soon…"

Several personal injury lawsuits in the US have been filed against Merck & Co, the maker of Fosamax, including a 60-year-old Florida women with osteonecrosis of the jaw (ONJ) who was prescribed the bisphosphonate drug for osteoporosis. Attorneys predict that potentially thousands of claims will be filed against Merck, alleging Fosamax caused femur fractures, ONJ and other injuries.