David was only 40 when he was prescribed Fosamax for osteoporosis ten years ago. In 2008 David broke his femur for no apparent reason, but his internal medicine doctor knew that Fosamax was to blame. "Even though I am very upset with the Fosamax manufacturer, I am happy that my doctor had the opportunity to present my case at a bone conference," says David. "Many doctors now wonder why Fosamax is prescribed at all, knowing that these problems exist." 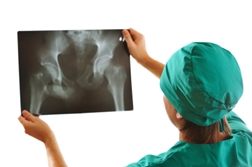 "Fosamax seemed to work at the beginning but in 2008 I began to have pain in my left hip; I thought it was my bursitis or arthritis," David explains. "I didn't seek medical help right away but on January 16, 2008, the pain became extremely intense. I had my mother take me to ER and I had x-rays but no one could find anything wrong. When I got back home, I took one step inside the house, and soon as I shifted my weight, my left femur broke. I fell back into the carport."


"As I healed, my left side became one inch shorter than the right side… I am restricted in a lot of things I was once able to do. I can't get on a ladder, can't stand on a chair, in fact I can't do anything that requires me to elevate myself"
January 16 is also the date that David stopped taking Fosamax. Even though he didn't know anything about Fosamax femur fractures, he just felt that the drug was the cause.

"I was taken back to the hospital, where they put me into a morphine sleep so I could have surgery," says David. "The surgeon placed a rod that goes from my hip to my knee and a screw into the hip socket. But as I healed, my left side became one inch shorter than the right side. Of course that has caused a lot of back problems and more.

"Now I have to wear a special shoe to walk with. Even with the lift I can't do stairs that well. I am restricted in a lot of things I was once able to do. I can't get on a ladder, can't stand on a chair, in fact I can't do anything that requires me to elevate myself.

"When I started to recover I asked questions but no one could give me an answer. I was in hospital for about a week but I was in a wheelchair for a few months. Later, my internal medicine doctor explained to me that Fosamax was the cause (I visit him because I am borderline diabetic). The reason it didn't show up in the x-ray was because they were micro-fractures—they were too tiny for the radiologist to pinpoint. He also told me that I was the very first person to identify pain before the break—that is why he took my case to the bone conference.

"I was very upset with the makers of Fosamax because I heard that they knew about this problem, but didn't improve upon it. I also heard from the manufacturer that only a small percentage of Fosamax users will suffer these side effects. Unfortunately, I am in that percentage. What are they going to do for people like me who are going to suffer for the rest of our lives?

More FOSAMAX News
"Everything that has happened since my femur broke has surprised me. We don't know for sure if this was caused by Fosamax but I also wound up with kidney damage one week later. I only have 40 percent kidney function now, barely enough to stay off dialysis. I have asked doctors if Fosamax is also related to kidney failure but no one knows.

"This incident was an eye-opener for my surgeon. He doesn't prescribe Fosamax but you'd think every doctor should know about these side effects, especially with a widely prescribed drug. I told my prescribing doctor what happened and the link between my femur break and Fosamax. He was also unaware of it."

David just retained an attorney who is in the process of getting David's medical reports ASAP due to the statute of limitations.

If you have suffered losses in this case, please send your complaint to a lawyer who will review your possible [Fosamax Lawsuit] at no cost or obligation.
Request Legal Help Now