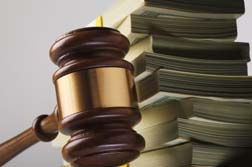 According to Reuters (2/5/13), an eight-person federal jury awarded the plaintiff, Rhoda Scheinberg, $285,000 in her Fosamax lawsuit, which alleged Fosamax was a defective product and that the drug caused her to develop jaw bone disease after dental surgery. Although the jury rejected the argument that Fosamax is defective, it did find that Merck did not adequately warn about the risks associated with the medication.

Merck has reportedly said it disagrees with the verdict.

Of seven bellwether cases to go to trial, Merck has won five. The first loss was to plaintiff Shirley Boles (Boles v. Merck & Co., Inc., 06-cv-09455), who was awarded $8 million in her lawsuit alleging she developed osteonecrosis of the jawbone after using Fosamax. A judge later reduced the award to $1.5 million, finding the original award unreasonably high. Boles then opted to file another lawsuit. In September 2012, Law360 (9/18/12) reported that Merck reached a deal in the lawsuit, but noted that the deal was not considered a settlement.

More FOSAMAX News
Fosamax has also been linked to non-traumatic femur fractures. In January 2011, the US Food and Drug Administration (FDA) issued a warning that bisphosphonates (a class of drug that includes Fosamax) have been linked to atypical femur fractures. The FDA recommended that patients taking bisphosphonates, especially those taking the drugs for more than five years, periodically evaluate whether continued therapy is needed. The agency did note, however, that it was not clear the bisphosphonates caused the thigh fractures, but that they may be linked. The drugs’ warning labels were updated to reflect this potential link.

Bisphosphonates are typically prescribed to strengthen a patient’s bone density, especially in women with osteoporosis. Some critics are concerned that the drugs are being used more frequently on patients who do not have osteoporosis as a preventive measure, putting them at unnecessary risk of side effects.

Posted by
TERRY ELLS
on February 26, 2013
I have 2 grandkids, age 7,8 who have osteogenisis imperfecta type 1 and have taken 3 treatments each of zometa...12hrs. each IV in 3 yrs. and are scheduled for 1 or 2 more in a coupla years.. Although this appears to slow their breaks, the youngest did break his femur while playing hopscocth...it was badly displaced, tho was not a spiral fracture and the little girl complains of "her pains"...in her head and legs..I really hope that we have not caused them problems for later in life....thank you..terry ells
Posted by
Diane Shopiro
on February 25, 2013
I was prescribed Fosamax for 10 years until I suffered an abscess of my lower right molar in September of 2008. The abscess was cleaned out and my gum failed to hold the stitches. My periodontist, noting my failure to heal, my numb, swollen jaw with three loose molars, and a growing collection of broken jawbone fragments, attributed these problems to Fosamax after learning that I had been taking that drug for 10 years. I immediately went off the Fosamax in September of 2008 but I was still suffering from the same symptoms. I was treated with Metronidazol once per month, which temporarily took down the infection, but failed to heal it completely until October of 2012 when I had the three loose lower right molars extracted. I still have some numbness in that area of my jaw.