Risk for Fosamax Fracture Is Rare but "Very Real"

Various lawsuits that allege Fosamax side effects have been consolidated in New Jersey, according to Lawyers Weekly USA on June 10. At least three dozen Fosamax lawsuits currently pending—as well as new complaints that will add to the total—will be heard before US District Court Judge Garrett E. Brown, Jr. 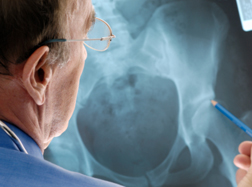 It may prove to be a confusing portfolio at least in association, given the fact that Fosamax is prescribed to offset the tendency for bones to become brittle and weaken over time, exposing them to fractures as individuals age. For bones to weaken is normal physiology. Fosamax is designed to slow that process down.

And yet, according to a communiqué from the US Food and Drug Administration (FDA) this past October, Fosamax has also been known in rare cases to contribute to Fosamax femur fractures.

Various studies have weighed in, attempting to explain this contrast. How is it that a drug designed to strengthen bones so they won't fracture can itself foster fractures?

The latest study, originating in Sweden, postulates that Fosamax and femur fractures is a rare association. The exhaustive study, published recently in the New England Journal of Medicine, included every woman in Sweden above 55 years of age in 2008.

A total of 59 cases of atypical fracture were identified. Of those, 46 had ingested a bisphosphonate such as Fosamax out of 83,311 Swedish women belonging to that demographic. The remaining 13 women having atypical fractures of the femur had not used the drug at all, resulting in an overall fracture rate of less than 0.001 percent.

More FOSAMAX News
However, it should be noted that once the ages of the women were adjusted, the risk of Fosamax fractures rose by 47 percent. In spite of this, a co-author of the Swedish study maintained that bisphosphonates were still soundly beneficial—a view echoed by Dr. David Newman, director of clinical research at New York's Mount Sinai Hospital, who added in comments published in the Los Angeles Times on May 29 that for every 100 women taking a bisphosphonate such as Fosamax for three years, six will avoid a fracture to their femur.

Newman added, however, that such a benefit only relates to patients with established low bone density or a history of fractures. For anyone else, any benefit inherent with Fosamax is made moot.

And the risk for Fosamax side effects such as a fracture to the femur was sufficient grounds for the FDA to issue a warning last fall, together with a requirement for new labeling for Fosamax and other bisphosphonates.

Newman has the last word when it comes to the potential for Fosamax fractures in those patients who do not fit the ideal criteria for Fosamax. "The rare side effects are very real," he said.