Karol K. took Fosamax for a year and a half before she developed problems with her teeth and jaw. However, when the problems started, they were severe, requiring the removal of all her original teeth. Compounding the problem is that Karol is a diabetic, so tooth and jaw health are extremely important.

"I didn't go longer than six months between dental check-ups," Karol says. "I had extensive dental work done to keep my teeth in really good condition. When I came to Florida in 2003, I had osteoporosis really bad. The doctor put me on Fosamax once a week. Of course, you don't see the results of how it's working until you go for a bone scan. 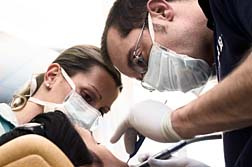 "After a year and a half I developed abscesses in my teeth. But they were unusual because they would not break outward: they were inward. I had a permanent bridge that had to be removed because the abscess was underneath it. I got four to five abscesses in a two to three week period, all under different teeth. I saw two oral surgeons who said that my teeth would need to be removed. But I would have to take all these antibiotics for the infection, so I decided to talk to my internist.

"My internist saw me and said that all my teeth needed to be removed immediately or I would go into sepsis. I was at risk of my teeth dripping bacteria into my blood, which could then go to my brain. I contacted an oral surgeon and had all 23 original teeth pulled in one day."

Karol says that because she did not have dental insurance, she had to pay $20,000 for her dental work. But her problems did not stop with the teeth being removed. "My bottom jaw was deteriorating, so I could not hold dentures in," Karol says. "I lost 60 pounds in three months. They [doctors] kept looking in my mouth to see when my jaw could hold a titanium rod. Three of the rods went bad, possibly because my jaw was not holding them tight.

"The oral surgeon said he had heard a lot about Fosamax, but a lot of dentists were not warned about it and the risk of teeth dripping bacteria."

Karol now takes a different medication once a month for her osteoporosis, which is stage four in her hips. She says she might not have realized that Fosamax could have been causing her problems if her sister had not called her with the information. "I had the exact same symptoms as those other people," Karol says. "Teeth going bad, sepsis...I never put two and two together. I didn't know what it was doing to me.

More News
"Normally, if you have an abscess it will come through your mouth. Mine wouldn't—it was down and going through the root. It was like my jaw couldn't stabilize my roots. I went to two orthopedic surgeons and I only wanted the bad tooth pulled—they wouldn't touch me. They said that all my teeth needed to go. Then my internist said the same thing. The doctor scared my husband so bad that we went to the orthopedic surgeon the next morning.

"It's horrible to take something to prolong a decent life and then it does just the opposite. If this helps one person not go through what I went through, that would be good."