"I was on Fosamax for three years until x-rays found decalcification in my jaw," says Fay Sedore. "I thought this medication was supposed to help bone loss, not make it worse."

"In April 2003 I suffered fractures in my foot. The doctor told me I had severe osteoporosis in my foot and he followed up with a bone scan. That's when he started me on Fosamax and calcium pills," says Sedore. 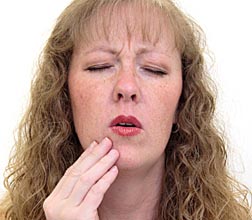 "Next up, I had a lot of dental x rays - including a panorex x-ray around my entire jaw. My dentist said I had severe decalcification in my jaw and teeth and I also had several cavities. This really surprised me because I hadn't had any trouble for years - my teeth had always been perfect, and very hard. I was only in my late 40s; much too young to start losing teeth; and the last time I had cavities was in my childhood.

I also had gum disease and now a few teeth are loose. I don't know if the decalcification was localized just in my jaw but it sure was noticeable compared to the x-rays I had a few years ago. I was talking to my husband about these results and he told me that he saw something on TV about Fosamax and how it contributed to bone loss in some people - I thought it was supposed to be the opposite!

I made another appointment with my doctor. I told him what my dentist found and he had already received a letter from my dentist. "I thought decalcification is supposed to be the final end stage of osteoporosis,' I said. He agreed and said it was a bad sign. 'You've had me on this Fosamax for three years and it isn't helping any,' I said. He told me to give it more time to work and he also said it had helped the osteoporosis in my hip. But it certainly wasn't helping my jaw.

He wanted me to stay on Fosamax but I refused. I went on another medication instead but it wasn't covered by Medicare/Medicaid. Finally he found a medication that was covered and I have been taking that since last summer.

I went back to my dentist and he said he won't do anything until I have the second bone scan. I had to wait - Medicare will allow another bone scan every few years so I am having one this month. I am really worried about the results. I don't want to lose my teeth and I don't want to end up having all kinds of problems such as fractures.

More News
My gums are receding and I have constant jaw ache and toothache. I am on pain meds so that helps; the pain doesn't keep my awake at night but the worrying does.

My doctor tried to blow off the side effects of Fosamax like it was no big deal. He said that only a handful of people had problems, it is a rare condition and that some people were just trying to blame bone loss and jaw bone loss on Fosamax. But I can't figure out why I have been on this medication for three years and I am worse off now. I have had no improvement except for my hip - everything else has worsened.

Since he told me this I have read about Fosamax online and it isn't that rare. To have this happen to your face - I don't want to be disfigured. I don't want to look like a Halloween pumpkin with missing teeth! I have always brushed and flossed regularly and check-ups every six months - this shouldn't have happened to me.

If you or a loved one has suffered from ONJ after taking Fosamax, please contact a [Fosamax] lawyer who will evaluate your claim at no charge.
Request Legal Help Now