Florida attorney Chip Parker says he is "appalled" by the way the fundamental rules of law are being bent, twisted and even ignored in order to ram foreclosures through the courts at lightning speed. "One day you could be the victim of an auto accident, or accused of a crime—there could be a number of reasons why you find you need access to the legal system," says Parker from Parker & DuFresne in Jacksonville. "If the rules of law are capable of being bent during this foreclosure crisis—then it means the rule of law can be bent at anytime!" 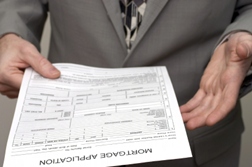 Parker also condemns the banks for their apparent unwillingness to work with people to keep to their homes and slams the "mortgage securitization" schemes that led to the foreclosure mess in the first place.

After Arizona, Florida has the biggest mortgage default debacle in the US. Parker is currently defending 500 foreclosure cases and spending hours and hours every week in the state's foreclosure courts.

He's got a front-row seat and he is aghast at bank lawyers who show up in court on the date of summary final judgment (that's the day the court can take your house away) with evidence opposing counsel has never seen, or without documents to definitely prove that the bank holds the mortgage.

"It is a very specific technical rule that has obvious reasoning behind it. You can't be ambushed with evidence," he adds.

And if that isn't enough, Parker argues that a fundamental part of all mortgage agreements is being mowed over in the process. Lenders have a legal obligation to work with homeowners in the event the borrower can't make their payments says Parker. But the foreclosure courts aren't holding the banks to that duty.

The bundling of the "securitization of mortgages" has muddied the waters badly. The benefit of the doubt is heavily weighted in the bank's favor and Parker says homeowners are getting a raw deal.

"As far as I am concerned, a fair deal in a case where the plaintiff (the bank) can't prove ownership is to work out a deal that allows my client to pay the fair market value of the property, re-amortize the loan over 30 years at a market rate of interest," says Parker.

More FLORIDA FORECLOSURES News
So what drives Parker to speak out? He's been a foreclosure lawyer for 18 years and this just doesn't sit right with him. "I don't want to give you a false impression," says Parker. "I make a good living doing this—and I think I am good at what I do and I am compensated very well."

But says Parker, a strong and just legal system is vital to democracy. "Why should anyone be put in a position where they are questioning whether they are going to be treated fairly and in accordance with the law?"


Chip Parker is a name partner with the firm of Parker & DuFresne in Jacksonville, Florida. He is an expert in bankruptcy law and has been a member of the Jacksonville Bankruptcy Bar Association since 1992. His practice areas include foreclosure, bankruptcy, chapter 7, reposessions, wage garnishments and debt elimination.

If you or a loved one have suffered losses in this case, please click the link below and your complaint will be sent to a real estate lawyer who may evaluate your FLORIDA FORECLOSURES claim at no cost or obligation.
Request Legal Help Now

Posted by
A.M. Henderson Martin
on February 11, 2013
When I read February 7, 2013, House Bill 87 I felt driven to write my own story.
Vote NO.
In one case 36-2009-CA-067230, I witnessed first hand, as part of the thousands of victims of the ROCKET DOCKET GANGS, resulting in my exposing the illegal acts carried out by JUDGE THOMPSON, lawyers Michael Kass, David Stern and Pavese law firm who were TAKING my parents’ home and other properties I owned UNDER THE COLOR OF THE LAW. They BREACHED THEIR FIDUCIARY DUTY as officers of the court, while proceeding with the plan to destroy me for my yeaars of activist work in CA and FL. where I spoke before city counsel against the illegal acts by COMMUNITY REDEVELOPMENT GROUP (CRA). In FL for changing zoning without proper due process or public knowledge, plus TAKING homes from elderly and working public. PROFESSIONAL MANAGEMENT CONSULTANTS (PMC), plus prior management companies hired by HARBOR SOUTH CONDOMINUM Boards repeatedly misappropriated funds, drove out anyone who desented then destroyed thirty years of records after I had filed a certified request to view HSCA records. Having used fabricated documents to file in Lee County courts the corrupt lawyers presented this fraud before now questionable judges involved in carrying out the TAKING of property from home owners- mostly elderly and poor are targets. But, when I fought back first paying the fabricated bills knowing I would be able to bring the case to a clean court. Little could I have suspected that would be a long time coming. Not knowing how C.C. police failed or refused to take complaints nor arrest the many people who repeatedly attacked us physically violating our civil rights for protection. My very ill elderly mother, my daughter and myself have been victimized and physically attacked rendering me Disabled. I now endured three spinal surgeries and more to come. In addition, my home in Los Angeles, CA. was bombed by a professional HIT MAN; according to those who were witness to the three addition bombs igniting the fires fought by L.A.F.D. So many dirty hands, yet, nothing has been done to put these people out of business then into jail; including those who are involved in the civil conspiracy within the system. Several lawyers cautioned me that others have been murdered for less than what I have written. My evidence is complied from 1999, but the FBI ignores my request for investigations over the years.
* 1) BANK OF AMERICA, while in process with me to modify my long awaited loan, contacted the courts to inform them and have the hearing postponed. The following day she called me shaken to inform me that both Judge Thompson and lawyer Kass refused her request. I filed a a BLUE INK plus evidence defense, but arriving in court as a low numbered victim on the roster I was set back to the end of the list of vic tims so I was able to witness the fraud. Case after case of abuse by Thompson who was evidently imcompetent to render any decree. It was obvious he had been ordered to TAKE all property.
2) Mishandling of my request for PROTECTION was immediatly denied by Judge Starnes, my cousin by marriage, then laughed at by Judge Rapken 36-2008-DR-001072--vs Leonard McCarthy, stated "the taint on the man's reputation would cause him not to be able to get a gun permit." What about his victims? For exposing in writing on-going fraud against the public records are altered and misfiled. Ordering a CD recording of my case, I paid $75.00, but found the participants changed, plus most of the testimony erased and another case mixed in.
3) I've been on the HSCA BOARD five times and each time Christina Schwinn the lawyer from Pavese who sits in on all meeting and takes over announces a RECALL-tomorrow is the vote. I filmed many years of abuse by these people but no one will handle the case because they are afraid. (I understand) Now I read another investigator is working on the collusion between Stern and Kass. I have Schwinn of Pavese telling our group that Kass and them do favors for each other all the time without payment. There is the collaberation.

Click to learn more about LawyersandSettlements.com
LawyersandSettlements.com - A trusted, independent legal news provider bringing quality news and information on legal cases and lawsuits filed in the United States of America to its readers since 2002. Over 650,000 legal help requests including Real Estate Cases have been forwarded to lawyers all across to the country.