The potential limitations of Force-Place Insurance and the added cost is reflected in the sad story of one homeowner from Turners Falls who experienced a fire in her home. Lender Insurance, as it has been widely reported, tends to be more expensive and offers less coverage than more traditional insurance products. 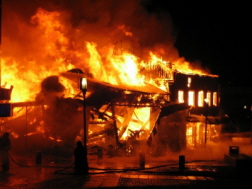 According to The Recorder (Greenfield, Massachusetts 1/11/16), a fire started in Amanda Pitchford’s bedroom in the night following a quick trip to the washroom. Pitchford is reported to have habitually left a candle burning, although it was unclear if the candle was the source of a fire that began within the linens of her bed.

Returning to her room to find her bedsheets in flames, Pitchford did her best to douse the flames with a fire extinguisher she had at the ready. However, it was reported that the plumes of foam succeeded only in spreading the flames to a tapestry that hung above her bed.

Firefighters are reported to have arrived within four minutes, but to no avail: the two-story wood-frame structure was devastated by the fire. It was reported that she had no insurance coverage for contents.

What Pitchford did have, however, was a Lender Insurance policy on her home, a Force-Place Insurance policy implemented by Ocwen Financial. Pitchford did not divulge the circumstances behind the need for the forced-placed insurance terms, but The Recorder did note that the homeowner’s premium was set at $2,251 per year.

Thus, it was with surprise when Pitchford learned that in spite of a high premium, her force-placed insurance coverage did not include any of the standard benefits for emergency clothing and shelter reimbursement, personal property damage, or tenant relocation coverage.

The Recorder took note of the $140 million settlement Ocwen was mandated to pay by a federal court in Florida following a Force-Place Insurance class action in 2015. Ocwen was accused of inflating the cost of forced-placed insurance premiums.

That settlement is indicative of the state of the forced-placed insurance industry, which has been at the receiving end of Forced-Placed Insurance Lawsuits and related settlements amidst allegations that insurers and mortgage underwriting companies have cozied up in a scheme involving kickbacks and other incentive payments that are borne on the backs of unsuspecting homeowners, or so it has been alleged.

More FORCE-PLACE INSURANCE News
Mortgage underwriting companies have the legal and ethical right to force-place insurance on a mortgaged structure if it is found that the owner, for whatever reason, has allowed insurance coverage to lapse - or coverage has been found to be inadequate. Hence, mortgage underwriting companies have the authority to force-place insurance in order to protect the investment.

However, there have been wide allegations - supported by lawsuits - that Lender Insurance policies are more expensive, with less coverage than standard-issue policies. It is alleged that premiums are inflated, with kickbacks and other payments borne on the backs of unsuspecting homeowners.

Plaintiffs have alleged that force-placed insurance terms have included coverage that wasn’t necessary or exceeded the mortgage company’s investment.

Posted by
sandy rothwell
on March 27, 2018
Ocwen Servicer force placed insurance on me in January 2016 and for entire year with no heads up or notice. However, on 6/23/16 I cancelled my Homeowner's policy with State Farm and renewed with Kemper Insurance, same day to cover new purchases. Never a lapses in service. Ocwen transferred my loan to another Servicer Carrington who continued to charge me even though they sent me a 45 day notice for evidence. Now since they charged me for insurance and misapplied my mortgage payment creating late fees, they are now transferring my loan yet again. Sounds like colluding.
So far I completed a compliant with the CFPB week of 3/19 and got a letter from Ocwen stating they received my "inquiry" and will response by 4/18/18; Since this appear to be fraud, I spoke with our local District Attorney Office who said to send in a compliant with back up documents but that did not want me to send it if CFPB is handling the compliant. My question is because I was "Notice" for about 1 1/2 years and now there is a huge balance in escrow with late fees, and it seem the Servicer wants to affect foreclosure by splitting my mortgage payment between ins., principal and interest. I want to know from a legal perspective, what should I do. Thank you.
Posted by
J Kelly
on March 16, 2016
Ongoing issue with the amount of forced place wind insurance policy premium on a mortgage of less then $25,000. Previous policies had been under $600 a year. Now the policy premium is close to $300 a MONTH because they are basing the premium on 80% of the rebuilding cost. We have hazard insurance with a different company which stopped writing wind policies . The two companies a local agency carried lines with had astronomical premiums we could not afford. These mortgage companies are ripping people off

Click to learn more about LawyersandSettlements.com
LawyersandSettlements.com - A trusted, independent legal news provider bringing quality news and information on legal cases and lawsuits filed in the United States of America to its readers since 2002. Over 650,000 legal help requests including Insurance Cases, and Financial Cases have been forwarded to lawyers all across to the country.