The maker of Veggie Booty children's snacks faces another lawsuit after an outbreak of salmonella poisoning sickened approximately 60 people. This second lawsuit was filed by the parents of two children who became ill after eating Veggie Booty. More lawsuits are likely to be filed as further information about the salmonella outbreak becomes available. 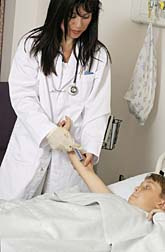 The second lawsuit was filed after two 20-month-old babies ate Veggie Booty and subsequently developed a fever, abdominal cramping and bloody diarrhea. One of the children was nearly hospitalized for treatment of her salmonella symptoms. Her parents report she had a temperature of 105.3 and lost 2.5 pounds while she was sick. The plaintiffs have said that all they wanted from Robert's American Gourmet, makers of Veggie Booty, is an apology; however, by the time the lawsuit was filed, the company had not offered an apology. The family's dog also developed salmonella but has since recovered.

The first lawsuit against Robert's American Gourmet was filed by the parents of an Indiana boy who became ill three days after eating Veggie Booty on May 20. The 18-month-old developed severe diarrhea and was diagnosed with salmonella poisoning at a hospital.

According to FDA News, Salmonella usually causes diarrhea, abdominal cramps and fever, with symptoms beginning one to four days after exposure to the bacteria. In some cases, particularly infants and people with weakened immune systems, Salmonella can infect the blood stream, causing potentially fatal infections. Most of the reports of Salmonella poisoning related to Veggie Booty involved children under the age of 10. At least five individuals were hospitalized after eating the snack food.

More News
Veggie Booty is a snack food that contains kale, spinach, carrots, broccoli, and cabbage. The food, which is baked, can be purchased at food stores, supermarkets, health food stores, and vending machines. Veggie Booty is also included in some gift baskets available through the Internet.

Robert's American Gourmet has actually recalled its products before. The previous recall involved false food nutrition information that was listed on nutritional labels for Pirate's Booty. A staff member at the Good Housekeeping Institute tested Pirate's Booty and found it had three times more fat than advertised. In fact, tests showed that the snack food had 8 grams of fat and 147 calories, but the packaging claimed Pirate's Booty contained only 2.5 grams of fat and 128 calories. A different lab found that Veggie Booty had 10 grams of fat at the time.

If you or a loved one has suffered damages in this Salmonella case, please contact a lawyer involved in a possible [Veggie Booty Lawsuit] who will review your case at no cost or obligation.
Request Legal Help Now