As the nationwide Salmonella Montevideo outbreak continues to grow, the salmonella lawyers at Simon & Luke have been busy fielding questions from hundreds of concerned citizens on our toll-free hotline (1-888-335-4901). Below is an update on the outbreak with answers to the most frequently asked questions. 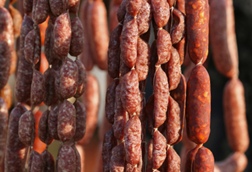 How many people are sick?

Illnesses began between July 4, 2009 and January 24, 2010. The ages of infected individuals range from less than one year old to 93 years old. Fifty-three percent of patients are male. No deaths have been reported to date.

It is important to note, however, that for every confirmed case above, the CDC recognizes that there are roughly 30 more people who are never counted due to lack of testing, failure to go to a doctor, misdiagnosis, or other reasons. That means that as of right now, as many as 7350 people have become ill as a result of this outbreak.

What food is the source of the outbreak?

These products were distributed to retail establishments nationwide.

This announcement added approximately 23,754 pounds to the initial recall. These products can have an extended shelf life of up to one year.

How did the salami / sausage become contaminated?

State laboratories have been working to find out exactly how the products became contaminated, and it looks like they have found the cause—the pepper coating on the salami / sausage.

Since the recall, numerous samples of Daniele pepper-coated salami products taken from the homes of ill patients have tested positive for the outbreak strain of Salmonella Montevideo, along with another strain of salmonella - Salmonella Senftenberg. These samples were tested by health departments in Washington, Iowa, and Illinois.

Recent test results provided by the Rhode Island Department of Health revealed that an opened container of ground black pepper used in the manufacturing of at least some of the recalled products had tested positive for Salmonella Montevideo and that the DNA fingerprint matched the outbreak strain.

The US Food & Drug Administration (FDA) is now investigating the two companies who sold the pepper to Daniele: Wholesome Spice of New York, and Mincing Overseas Spice Company in New Jersey. The Agency has collected and is currently analyzing black pepper samples from both companies.

How common are the Salmonella Montevideo and Salmonella Senftenberg serotypes?

I became sick after eating the recalled products. Do I have a case?

Persons who tested positive for the outbreak strain of Salmonella Montevideo and Salmonella Senftenberg have been or will be contacted by their county or state health departments to be questioned about the foods they ate prior to becoming ill.

If you tested positive for salmonella, and were contacted by your county or state health department and questioned about the consumption of salami and sausage products, then it is highly likely that you are one of persons sickened in this national outbreak. If so, you are entitled to compensation for all of your medical bills, lost wages, and suffering you endured.