The peanut butter salmonella story just gets bigger, with news this morning that a second manufacturing facility operated by Peanut Corporation of America (PCA) has been temporarily closed after testing positive for salmonella. And the number of recalled products is closing in on 2000. Federal regulators have not ruled out a second recall. 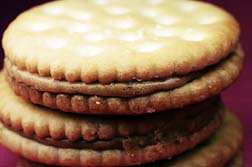 Meanwhile, former workers who were laid off when the Blakely, Georgia facility closed, having revealed that in their view the plant was "filthy."

The family of a woman who died from eating tainted peanut butter produced at the PCA plant has launched a lawsuit.

The peanut butter salmonella recall has become one of the largest recalls in US history. So far the number of products recalled stands at an incredible 1,845. The death toll, representing lives lost either as a direct result, or in suspicion of a link to peanut putter salmonella, remains at 8. Depending on whom you believe, the illness count seems to have stabilized at about 600 across 43 states.

But the story ain't over yet.

On Monday the Federal Bureau of Investigation (FBI) raided the Blakely PCA plant to mine the offices for quality control records and other documents as part of an ongoing criminal investigation. The US Food and Drug Administration (FDA) was there as well, and it was revealed by ABC News yesterday that the PCA head offices in Virginia were also raided, and searched.

Authorities want to know who conducted the salmonella tests, who signed off on them, and who were ultimately responsible for knowingly shipping out product that could make consumers sick, or worse.

The family of Shirley Mae Almer of Perham, Minnesota would also like to know. The woman died just before Christmas after eating tainted peanut butter. Her family has launched a lawsuit, and say that their mother loved her peanut butter and toast first thing in the morning.

Almer was a resident of a nursing home—an example of an institution that PCA distributed products to. While PCA does not manufacture peanut butter in jars sold at retail, it found a niche manufacturing, and selling peanut butter in large quantities to schools, food services and institutions. A peanut paste, which is a more industrial-grade mash of peanut butter without the added sugar, was sold to various manufacturers for inclusion in what is fast becoming apparent, thousands of products.

The salmonella linked to PCA was actually first discovered in a large container of peanut butter at a nursing home.

"(Almer) died because every morning she liked to have toast with peanut butter," Senator Amy Klobuchar (D-Minn.) said last week at a Senate hearing.

Meanwhile, it has been confirmed that samples taken from a second PCA plant in Plainview, Texas tested "99 percent positive" for salmonella. That plant has also been temporarily shuttered. ABC News reported that while none of the product manufactured at the Plainview plant reached consumers, the FDA conducted no fewer than 50 samples, and a second large recall has not been ruled out.

If there is any encouraging news to the peanut butter salmonella recall, it is that a third plant operated by Peanut Corporation of America, located at Suffolk, Virginia, passed an inspection on January 26th. The FDA took samples at the facility, and they all came back negative.

Today there is the potential to hear from either, or both the plant manager of the Blakely facility, or the president of the company. If CEO Stewart Parnell appears before the House Energy and Commerce Subcommittee on Oversight and Investigations, it will be the first time the PCA chief has spoken publicly since the outbreak began.

More FOOD INJURY News
The investigation continues. Meanwhile, the larger issue of food safety oversight continues to appear dangerously flawed. It was reported by ABC News that the state of Georgia, working on behalf of the FDA, had inspected the Blakely plant on 10 different occasions over the past 3 years. While inspectors found problems with sanitation and protocols to mitigate contamination, at the same time they pronounced those lapses to be routine.

Supervisors promised to fix them.

State inspectors tested three products for salmonella in 2007. All came back negative. However, officials at the PCA plant did not divulge that there had already been 5 positive tests for salmonella that same year.

They didn't tell, because it is not a requirement to report that information.

"They're not held to any standards," says Nancy Donley, president of the food safety advocacy group, Safe Tables Our Priority, or STOP, in comments to ABC News. "Unfortunately, we go from disaster to disaster, if you will. I don't know how many [recalls] it's going to take to finally get government to wake up and say, 'This is enough. Enough is enough already.'"