Safeway is the target of a national class-action suit alleging it has failed its duty to notify customers when they have bought recalled food items. "All their competitors make the effort to contact customers," says Steve Gardner, the chief litigator for the Centre for Science in the Public Interest (CSPI). "Safeway just doesn?t make an effort to do it. 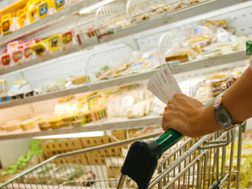 "Safeway is probably ignorant of the fact that they were selling tainted food at the time it was sold," says Gardner. "We are not alleging that they are dumping bad food. But when they did learn the products were recalled, they kept that fact effectively secret."

It was a San Francisco neighborhood newsletter that informed Jennifer Rosen that she possibly had salmonella tainted eggs in her fridge purchased at Safeway. Another plaintiff from Montana purchased potentially deadly peanut butter cookies at Safeway that were part also part of a salmonella recall.

Gardner and the CFPI are working together with San Francisco consumer law attorney Dan LeBel. They have filed a national class action on behalf of the plaintiffs in Safeway's home state of California alleging Safeway is in violation of the California consumer protection laws.

Safeway has almost 2,000 stores across the United States and Western Canada with annual revenues of more than $40 billion a year. The store regularly posts recall notices on its Web site, but Gardner says Safeway is not meeting its corporate duty to inform.

"They maintain that is sufficient." says Gardner, "but I for one, do not generally check out the recall section of Safeway before I go there to buy food."

More FOOD RECALL News
Gardner says the Safeway club card members provide the grocery retail chain with all kinds of information that make it possible to contact customers when there is a recall.

"They have email, phone numbers, home addresses and all kinds of information," says Gardner. "There are some people who shop at Safeway that don't have a frequent shopper number, although since that is the only way you can get the sales prices, those people are very few."


Steve Gardner is the senior litigator with the Centre for Science in the Public Interest and is based in Texas. Dan Lebel is a consumer law attorney and securities attorney based in San Francisco.
READ ABOUT FOOD RECALL LAWSUITS

If you or a loved one have suffered losses in a similar case, please click the link below and your complaint will be sent to a food and drug supplements who may evaluate your claim at no cost or obligation.
Request Legal Help Now