More FOODBORNE ILLNESS News
A family of six that was recently treated for severe cases of food poisoning may have ingested the known hallucinogenic Jimsonweed while eating dinner. 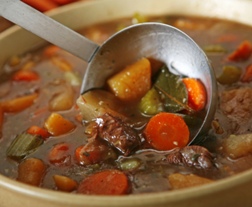 In July of 2008, six adult family members were admitted to a local emergency room suffering from hallucinations, confusion, mydriasis (dilated pupils) and tachycardia (heart arrhythmias) for approximately 3-4 hours. A subsequent investigation by the Montgomery County Department of Health and Human Services and the Maryland Department of Health and mental hygiene found traces of Jimsonweed in the homemade stew the family had eaten around four or five hours earlier.

Jimsonweed, a member of the nightshade family, contains the chemicals atropine and scopolamine and has been linked to anticholinergic-type poisoning. The family member who prepared the stew had been growing the herb and used clippings from several of its leaves in the meal.

The family members, who ranged in age from 38 to 80, were treated with a combination of cardiac therapy, intravenous fluids and lorazeprem to control their agitation. Four of the six members were discharged from the hospital three days after admission, and the remaining patients exited within the next several days. All patients fully recovered, according to the official report from the Centers for Disease Control and Prevention.