In 2008 authorities in Mexico turned away a shipment of American beef at the border. The meat was tested for traces of copper and did not meet Mexico's limits for copper content. However, that contaminated beef could be easily sold in the US, which has no such limits on the books. 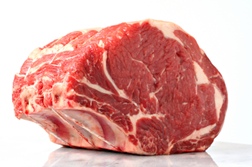 A new report by the US Department of Agriculture Inspector General warns that meat consumed by Americans could contain trace amounts of antibiotics, pesticides or heavy metals. The potential for such contamination exists, says the report, because federal agencies have failed to set limits on the presence of a number of potentially harmful chemical residues which, according to a report appearing early this morning on CNN.com, "has resulted in meat with these substances being distributed in commerce."

That means it winds up in your freezer, on your barbecue and on your dinner table.

Rather than focus on bacteria contamination such as E. coli, the study looked for the presence of chemical residues, which can build up over time. Unlike salmonella and E. coli bacteria, thorough cooking will not get rid of them.

Tony Corbo, of the consumer advocacy group Food and Water Watch, is of the view that the government has dropped the ball. "Some of the residues that the inspector general cited could be carcinogenic, as they accumulate over a period of time in the body," he said.

The USDA has pledged swift action to address deficiencies identified in the inspector general's report. Among the "corrective actions" the USDA is considering are testing for more kinds of residue and setting limits on how much is allowable for each substance.

More FOOD News
The National Cattlemen's Beef Association said that it supports any government intervention that helps to promote and ensure the safety of the nation's beef supply: "While the US beef supply is extraordinarily safe by any nation's standards, the beef industry is constantly looking for ways to improve the systems that ensure the safest product possible for our consumers."

First reported in USA Today, the study reveals the difficulty of tracking the source of chemicals in beef. Even if cattle test positive for residue, the fact that meat passes through several buyers and suppliers on its way to the dinner table makes it nearly impossible to track the residue back to the original herd under the current regulatory environment.