Just when you thought it was safer to bypass the tap and reach for the bottled water, comes word that some brands of bottled water have been found to contain up to 100 times more bacteria than the stuff that flows out of your tap. 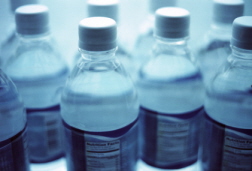 As reported this morning by CanWest News Service, researchers in Canada purchased and tested a variety of brands of bottled water. What they found surprised them: many of the popular brands contained "surprisingly high" levels of heterotrophic bacteria.

"Heterotrophic bacteria counts in some of the bottles were found to be in revolting figures of (100) times more than the permitted limit," said Sonish Azam, a researcher from C-crest Laboratories in Montreal, in comments published in a news release.

Incredibly, more than 70 percent of the popular brands of bottled water tested failed to meet standards set forth by the United States Pharmacopeia, the non-governmental agency responsible for setting safety standards for medications and health care products.

The researchers came up with the idea for the study after one of their number complained of foul-tasting bottled water that made the individual ill.

While there were no pathogens found in the test samples, the high bacteria counts were a concern. No more than 500 colony-forming units (cfu) of bacteria per milliliter should be present in drinking water, according to the USP.

In tap water, the average cfu count was found to be 170 per milliliter. In comparison, some bottled water samples were found to contain a staggering 70,000 cfu per milliliter.

The particular brands of water were not revealed.

More FOODBORNE ILLNESS News
"Despite having the cleanest tap water, a large number of urban Canadians are switching over to bottled water for their daily hydration requirements," Azam said. "The consumer assumes that since bottled water carries a price tag, it is purer and safer than most tap water."

"Bottled water is not expected to be free from microorganisms but the [colony forming unit count] observed in this study is surprisingly very high," Azam said. "Therefore, it is strongly recommended to establish a limit for the heterotrophic bacteria count as well as to identify the nature of microorganisms present in the bottled water."

The researchers presented their study results at the general meeting of the American Society of Microbiology in San Diego on May 26.

Despite the high bacteria count, it should be noted that such high cfu levels don't normally foster disease in healthy individuals. However, pregnant women, infants and the elderly could be put at risk.