Parents will be forgiven for combing through their pantries and cupboards looking for anything containing peanut butter, after it was revealed late yesterday that Peanut Corporation of America (PCA) dramatically widened it's recall of products suspected, or having the potential of harboring peanut butter salmonella.

Until yesterday, PCA had recalled everything made at their Blakely, Georgia facility since July. 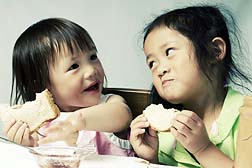 Now, they've recalled everything made at the plant over an entire two-year span—since January 1st of 2007. Although Kraft, a large maker of peanut butter products, is said not to have used PCA as a supplier and therefore is considered not affected, PCA nonetheless is a supplier to some of the largest food manufacturers in the US.

The death toll from peanut butter salmonella now stands at 8, with 500 cases of salmonella poisoning reported across 43 states.

Half of those cases of salmonella illness were reported in children.

Some of the biggest retail names have been affected, including Keebler and their Peanut Butter Sandwich Crackers. Jenny Craig is another. So is Kellogg. So far, more than 400 consumer products have been recalled, and with yesterday's announcement that list is bound to grow.

Dr. Stephen F. Sundlof is director of the food center for the US Food and Drug Administration (FDA). He told the New York Times this morning that "we don't have a good idea of how much of that product is still out there."

On kitchen shelves, in someone's pantry—and perhaps in some kid's lunchbox tomorrow…

The most damning thing of all is that the Blakely plant, according to federal officials, knowingly shipped tainted food.

The problem, according to reports, is that food safety relies heavily on the voluntary self-policing of the food industry itself. When inspections are, indeed carried out and problems are found, the food industry agrees to voluntarily recall products suspected of having a problem.

That's a problem in itself, said Representative Diana DeGette (D-Colorado), in comments published this morning in the New York Times. The vice chairperson of the House Energy and Commerce Committee compared food manufacturers to problem children who "can't be relied upon to report their own problems and correct them in a timely fashion, so we're going to have to make them do it."

Unfortunately, until new leadership settles in at the top and new funding is provided, the FDA may be of little help. It has been reported that government inspections are rare, and sometimes inadequate.

That said, the FDA did make it out to the PCA Blakely plant on January 9th and found that on 12 occasions in 2007 and again last year, tests conducted by PCA did, indeed find salmonella contamination in its products. And yet, incredibly the contaminated products were shipped to customers anyway following a retest that revealed no contamination. Thus, there was no precaution taken.

There were no efforts, according to the New York Times report, to clean the plant after problems were found. As for the state of the facility itself, it has been reported that FDA inspectors found mold on the ceiling and walls, and foot long gaps in the facility's roof. No efforts were made, it was reported, to clean the equipment once salmonella contamination had been found.

Incredibly, it was determined that the PCA Blakely plant did not properly separate raw materials from finished products, among other cracks in its various processes. For this reason, it has been suggested that the sprawling plant should never have been allowed to manufacture peanut butter at all, given the conditions.

Gardiner Harris, the New York Times writer, makes the point in a back-story segment that food plant inspections by federal regulators have dropped significantly in recent years, and that much of it now is contracted out. For example, many of the inspections of the Blakely, Georgia PCA plant were done on behalf of the FDA by the Georgia Department of Agriculture, and while identifying problems at the plant within its own jurisdiction, viewed the findings as not problematic. Harris says state regulators tend to be not as tough as a federal regulator might, once involved.

On Capitol Hill, Representative Rosa DeLauro (D-Connecticut) stated, "I want to make this the year that we fix the nation's food safety system." She has called for a criminal investigation into the matter by the Justice Department. Meantime, Representative Bart Stupak (D-Michigan) is among a handful of powerful House members who proposed legislation yesterday that would serve to increase safety requirements for manufacturers of food, and extend federal regulators at the FDA greater authority and funding to beef up inspections.

Lawsuits will surely stem from this recall. Such a massive recall could have health implications for a greater number of consumers than the 500 Americans who have already become sick, and the 8 who have died. And the closure of the PCA facility in Georgia has local peanut farmers worried. And angry.

And while consumers have a right to be angry, it's hard to know who to be angry at: PCA, for allowing a continuation of poor conditions in its plant and allegedly shipping product with full knowledge of possible salmonella contamination? Or should the anger be directed at the FDA, for insufficient inspections, or for the allowance of inspections by state inspectors who, according to an FDA food scientist, inspect different kinds of plants and may not have known what was required of a peanut butter facility? Should that anger be directed at the Federal Government, for a lack of oversight of the food industry?

These are questions that may find answers with the help of litigation attorneys representing the interests of consumers harmed by peanut butter made by PCA in its Blakely plant.

More FOOD INJURY News
And there will be lawsuits. Lots of them. Peanut butter is a staple in millions of homes, and with such a massive recall—now widened even further—there is potential for more illness and death. Fine, and proud brand names have had their reputations sullied given their association with the now-vilified PCA plant. And peanut farmers in Georgia, in an already contracting economy, will see their livelihoods threatened even further with the closure of an important buyer of their crops.

All because of lax oversight that allowed salmonella contamination in a plant with mold on the walls—contamination that either went unnoticed, or allegedly covered up.