Mushrooms that could cause serious illness—or even death—have been recalled due to a potential for listeria, it has been learned.

Today a recall has been issued for 3.5-ounce packages of enoki mushrooms produced by Phillips Mushroom Farms, which is based in Pennsylvania. The fear, based on preliminary tests, is the potential for listeria contamination. 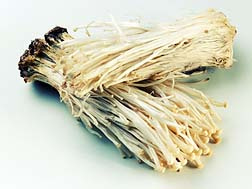 So far, no illnesses have been reported. However, listeria is right up there with salmonella and e.coli contamination in terms of seriousness, and the recall is being conducted as a precaution.

Listeria has been in the news over the past year, focused in Canada. That was when Maple Leaf Foods, the Canadian producer of deli meats and other meat products, was devastated with an outbreak of listeria at a Toronto manufacturing facility. Many were sickened as the result of the listeria outbreak, and there were deaths.

Listeria can cause flu-like symptoms, including fever and muscle aches. Nausea and diarrhea are also common symptoms of listeria poisoning and—much like salmonella and e.coli—listeria can be particularly devastating to the elderly, pregnant women newborn children, or anyone with a weakened immune system.

The mushroom recall involves 3.5-ounce packages of enoki mushrooms bearing the code UPC 33383 67540. Often used in Asian cuisine, enoki mushrooms are white and characterized by their long, thin profile. The offending mushrooms were packaged by Phillips Mushroom Farms in clear plastic bags featuring blue, or green graphics and sold from January 13th to 30th of this year.

Retailers have been instructed to remove the mushrooms from store shelves.

Phillips Mushroom Farms has placed an 'urgent notice' on its web site with regard to the recall, although little information is forthcoming. It was not mentioned if the US Food and Drug Administration (FDA) was involved in the recall.

Enoki mushrooms are described as tender with a sweet, mild taste. They have been described as grown in bottles, and pulled from the bottles at point of harvesting. The white mushrooms feature long stems and small caps, and are usually sold in clusters.

According to their web site, Phillips Mushroom Farms has been in business since 1927 and is a privately held grower, run by the Phillips family. Based in Kennett Square, PA the largest grower of specialty mushrooms in the US distributes more than 35 million pounds of specialty products each year.

Prior to this mushroom recall, a massive recall of products made with peanut paste from Peanut Corporation of America (PCA) has galvanized debate amongst advocates of food safety. While the investigation into the PCA recall continues, including the existing conditions at a plant in Blakely, Georgia, concern mounts over the relative safety of the nation's food supply, and the ability of federal regulators to properly monitor the industry in an effort to avoid illness, or death.

More FOOD RECALL News
Last week it was reported that a shipment of peanuts from PCA was refused entry into Canada when it was noted that the shipment was interwoven with some kind of black mass, and gave off a putrid smell. The peanuts, it was reported, were not allowed back into the US because of it. An earlier inspection of the PCA facility in Georgia revealed deplorable conditions, including mould on the walls and ceiling of the plant, and foot-long breaches in the building's roof.

So far, there have been no illnesses reported in association with the enoki mushrooms grown, and distributed by Phillips. However, if you or a loved one has been sickened with listeria from eating these potentially tainted mushrooms, you would be well advised to consult an attorney to explore your options.