Trace Melamine Found in Baby Formula in US

They say it isn't a problem—traces of melamine found in baby formula. But skeptics are wary, and their caution is understandable. With so much news about tainted, and contaminated goods originating from China (including tainted baby formula sold in Asian markets), the sudden appearance of melamine in a sample of infant formula made by an American manufacturer has everyone holding their breath. 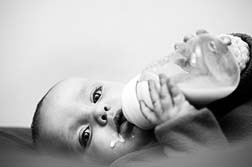 The discovery was revealed late Tuesday, and involves a single sample of infant formula that was found to contain trace amounts of melamine, together with several samples of dietary supplements made by the same manufacturer that made the suspect formula.

The US Food and Drug Administration (FDA) was quick to point out that the amounts of melamine found were low enough not to be considered a health threat. A spokesperson made the point that the contamination could have originated not with the baby formula itself, but rather with the liner of the container the formula was packaged in, or from some other manufacturing problem, according to a story appearing this week in the New York Times.

However, it should be noted that the advanced testing has come as a response to the rise of tainted products coming into this country from distant shores, including China. The latest problems, appearing earlier this year, centered on products geared primarily for the Asian markets. Melamine contamination was found in certain varieties of Mr. Brown instant coffee and tea, Blue Cat Flavor Drink, and White Rabbit Creamy Candy. Those products were recalled, and the FDA subsequently announced that all Chinese products containing dairy ingredients of any kind would be halted at the border, pending further testing.

On the testing front, the FDA decided to err on the side of caution, even in the face of assurances by American manufacturers of baby formula that they did not use ingredients sourced from China. Nonetheless, the FDA commenced rigorous testing, and utilized more sophisticated testing methods than previously used.

In a parallel story, the FDA's usual testing methods failed to detect the presence of a contaminant in heparin inbound from China, in a scandal that erupted earlier this year. It was only when more sophisticated methods were used that the contaminant was detected, and ultimately identified.

Sure enough, trace amounts of melamine were found in one of the 87 samples tested. An FDA spokesperson stressed that the amount of melamine fell below the 250 parts-per- billion threshold that is allowable under FDA guidelines. Thus, the FDA is of the view that the public health is not at risk.

And yet, people wonder. Melamine is a toxic substance that was used to boost protein levels in the Asian products referred to previously that were sourced from China.

Previous to that, was the Menu Foods debacle that saw thousands of pets sickened or killed, after melamine was found in pet food. Menu Foods, a Canadian company that serves as a contract manufacturer for many, well known pet food labels, had imported wheat gluten from China. The wheat gluten, used ultimately to manufacture the pet food, was found to contain elevated levels of melamine.

A $24 million settlement package was approved this week, laying to rest a litany of tainted pet food lawsuits, and claims that numbered into the thousands.

More FOOD AND SUPPLEMENTS News
As for dietary supplements, several of the tests revealed the presence of melamine—but there again, says the FDA, levels were below the allowable figure of 2.5 parts per million.

Still, they were there. And that's enough for many Americans to remain suspicious. Despite the assurances of the FDA, and manufacturers who assert they do not use ingredients sourced from China, this comes too close to home. On the heels of lead in children's toys, tainted toothpaste, adulterated heparin and contaminated pet food, was the most recent debacle affecting Chinese milk that led to melamine showing up in Asian baby formula.

No one wants that to happen here. The FDA, and the manufacturers say that it isn't, and it won't.

READ ABOUT FOOD AND SUPPLEMENTS LAWSUITS