Calorie Counts Are Not Always Accurate

A new study published in the January issue of the Journal of the American Dietetic Association suggests that many prepared foods and restaurant meals are labeled with inaccurate calorie counts. The false labeling may entice people to buy foods that are not as healthy as they appear. 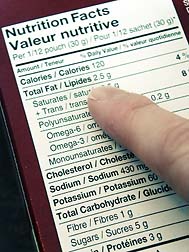 The researchers said they chose foods that dieters were more likely to choose. The healthiest foods on restaurant menus were typically listed as containing 500 or fewer calories. An average of 40 additional calories per meal may not seem all that important, but the extra calories can add up, making it that much more difficult for a dieter to lose weight.

More FOOD SUPPLEMENT News
Frozen food makers are apparently not breaking any regulations by underreporting calorie counts. According to a January 6 article in Time magazine, FDA regulations allow a 20 percent margin of error in the advertised calorie count of prepared food.

Furthermore, the Chicago Tribune notes that the FDA is actually tougher on food companies whose stated calorie count is higher than the actual caloric content. A company can theoretically get in more trouble for advertising 100 calories in a 90-calorie meal than for advertising 100 calories in a 200-calorie meal. As a result, companies find it profitable for a number of reasons to label their foods with reduced numbers of calories.

Researchers acknowledged that their relatively small sample size indicates the necessity of further research to determine how widespread the problem is.

If you have suffered losses in this case, please send your complaint to a lawyer who will review your possible [FOOD SUPPLEMENT Lawsuit] at no cost or obligation.
Request Legal Help Now