The pistachio nut recall announced by Setton Pistachio in late March was widened last night and could wind up rivaling the size and breadth of the peanut recall that affected hundreds of brands.

It's starting to look like the peanut recall all over again, with one difference: so far, no illnesses have been tied to pistachio nuts, or pistachio products contaminated with salmonella. Two illnesses that have been reported have yet to be linked to tainted pistachios. 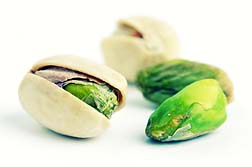 However, Setton Pistachio of Terra Bella California appears to be taking no chances after federal investigators found salmonella bacteria in critical areas of its California facility, according to a story in today's Washington Post.

In a new development, the US Food and Drug Administration (FDA) is also investigating another Setton facility, this time in Commack, New York. Setton International Foods manufactures chocolate, and yogurt-covered nuts. However the Commack facility failed an inspection March 9th after New York state officials reportedly found cockroaches and rodent droppings in the plant.

The FDA, together with the California Department of Public Health carted away hundreds of samples from the plant for analysis. Setton's response—which is completely voluntary—was to widen the recall from the initial claw back of about 2 million pounds of pistachio nuts.

Initially the company thought that the problem stemmed from a sanitation issue affecting one, or two production lines.

Now, the suspicion is that it's a much wider problem. Given that Setton supplies to approximately 35 wholesalers and food manufacturers, the tentacles of this recall have similar paths to the peanut paste recall. Setton's clients repackage the nuts for retail sale, or as ingredients in other products.

It could take weeks to determine a final listing.

So far, well-known brands and labels such as Planters, Kirkland and Frito-Lay are affected, as well as Whole Food Market and its' 365 brand.

The pistachio problem first came to light when Kraft Foods found salmonella on four separate occasions in trail mix. The latter is manufactured by Georgia Nut under contract to Kraft, but with pistachios sourced from Setton. In each case Kraft destroyed the samples and Georgia Nut initiated testing of its equipment and raw ingredients.

More Food Recall News
In an interesting aside, Kraft first detected salmonella in December of 2007, but it took 15 months to conclusively link it to pistachios. It has been reported that Kraft did not notify the FDA with regard to the positive salmonella tests, because none of the affected products entered the food supply.

It is interesting to note that under state and federal law, according to the Washington Post, neither Kraft nor Georgia Nut are, or were ever required to notify regulators with regard to internal tests that reveal bacteria contamination in food.

The FDA, in fact has no jurisdiction or authority to mandate that a manufacturer recall its product.

While the investigation continues, it is assumed that the recall will grow wider by the day, given that Setton Pistachio distributes nationwide and to 14 other countries.