For an industry paying lip service to the ideals of stamping out E. coli, the consumer beef industry will once again be cowing to criticism after yet another E. coli recall surfaced over the weekend. The American Foods Group has voluntarily recalled 96,000 pounds of ground meat after reports that two people were sickened.

While the amount of beef seems relatively small in comparison with much larger recalls in the past, the fact that two people have fallen ill against distribution of meat over seven states, presents two scenarios...

Or, as often happens, this could mushroom into a much wider recall.

As of this writing, it has not been concluded if the two people who fell ill actually have E. coli—that won't be known until further tests are complete. However, American Foods Group voluntarily recalled the beef as a precaution, pending further study.

What makes the recall a bit more confusing is that the beef products will not carry the American Foods Group label, as the meat was distributed out for further processing and repackaging, so tracing the potentially tainted meat could prove to be difficult. 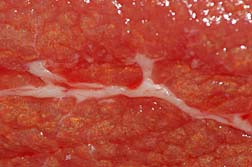 American Foods ordered the voluntary recall after the United States Department of Agriculture (USDA) Food Safety and Inspection service reported two people had fallen ill. The recall grew from an investigation by the Illinois Department of Health.

The potentially tainted meat products were distributed to retailers and distributors in Indiana, Kentucky, Maryland, Ohio, Tennessee, Virginia and Wisconsin. It is feared that the products could be infected with the potentially deadly E. coli O157:H7. Originating in the intestines of cattle, the O157:H7 pathogen strain can make healthy people extremely ill for several days, but most will usually recover without too much trouble. However, the strain can be particularly dangerous to children, the elderly, and people with weakened immune systems.

The recall was announced Saturday. At issue are products produced October 10th of this year. Complete information on this particular recall can be found at the [USDA web site].

So far, this is a relatively small recall when compared with the massive Topps recall of a few months ago. At that time, spokespeople with the meat industry were lamenting the pall that such a recall would put over their industry, given recent attempts to clean the industry up. Indeed, the largest players are diligent with their butchering and processing protocols, with the biggest of the big boys use state-of-the-art testing procedures. Often meat is tested every few minutes.

However, the bit players in the industry often do not have the resources for such careful attention to detail, and if the Topps recall taught us anything, government inspections often leave a lot to be desired.

Since the Topps recall, Cargill recalled tainted meat earlier in the fall, Tostinos recalled millions of frozen pizzas with potentially tainted pepperoni, and Compliments recalled a batch of tainted meat products in Canada.

In the end, it is always up to the end user to properly and thoroughly cook meat products. Thorough cooking will kill any microbial nasties that may be present.

However, if you like your burgers dripping red and practically mooing to enjoy your rare beef—beware of the potential aftershock. That beef could come back to bite you.

If you or a loved one has become sick after eating American Foods beef, please contact a lawyer involved in a possible [Lawsuit] who will review your case at no cost or obligation.
Request Legal Help Now