The tragic and horrific death of a resident of a gated community in Florida has evolved into a Florida premises liability lawsuit against, amongst others the operator of the community and the security company that warranted the community was safe and secure when in fact, or so it has been alleged, it wasn’t. 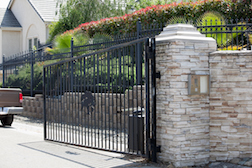 The victim in the premises liability Florida case was Jill Halliburton Su, who MailONE (09/11/14) identifies as the grandniece of The Halliburton Company founder Erle P. Halliburton. She was married to Nan-Yao Su, a prominent professor at the University of Florida and an expert in entomology – the study of insects. The couple lived in a large, finely-appointed home in the gated community of Westridge located in Davie, Florida.

It was on September 8, 2014 that Professor Su compelled the victim’s oldest son to physically go and check on the house when Su found that he was not able to access the home’s surveillance cameras while at work. Inside, Halliburton Su’s son found the body of his mother lying in the bathtub, hands and feet bound, the victim of a stabbing. Police found a rear door to the home near the pool had been compromised and a room had been ransacked. The tragedy was ruled a homicide and a suspect was located in the name of Dayonte Resiles, who the SunSentinel (09/19/16) reports was jailed in association with the crime 10 days later.

In an aside, Resiles was reported to have bolted from a courtroom in Broward County in July of last year and remained at large for six days before police recaptured the man, who remains the accused in the homicide and could face the death penalty if convicted (the SunSentinel reports that as of September 19 of last year, trial dates had not been set).

The Florida premises liability lawsuit, however does not name the accused. Rather, it names G4S Holding One, also known as G4S Secure Solutions USA, INC and FirstService Residential Florida INC., formerly known as The Continental Group, as defendants.

The thrust of the lawsuit is that the gated community should have, and was warranted as secure when it fact it was not, or so it has been alleged. According to the SunSentinel the alleged killer probably entered the gated community through a gap in the wall at the edge of the property.

Their Florida premises liability lawyer noted that the community was promoted as secure, with the lone gate located on Nob Hill Road – about a mile from the Davie Police Department – staffed by security personnel with a mandate to vet anyone arriving, or leaving the complex. The plaintiffs allege that the property managers warranted there was no other way in, or out of the gated complex and that all visitors were properly vetted.

More FLORIDA PREMISES LIABILITY News
Plaintiff’s legal counsel said in comments published in the SunSentinel that it was possible to simply walk into the gated community by going around the unprotected edge of the wall at the northwest corner. Plaintiffs allege the property managers of the complex should have been aware of such a breach in security that allowed Su’s killer to commit a home invasion undetected.

The Florida premises liability lawsuit seeks damages in excess of $15,000. The case is Nan-Yao Su, individually and as Personal Representative of the Estate of Jill Halliburton Su v. G4S Holding One, Inc. a/k/a G4S Secure Solutions USA INC., and FirstService Residential Florida, INC. f/k/a The Continental Group, Case No. CACE-16-016119 Div. 02, filed electronically August 31, 2016 in The Circuit Court of the 17th Judicial Circuit in and for Broward County.