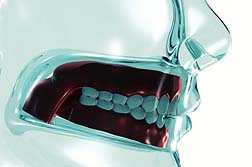 "I didn't know that I was having any problems until the last few years, when things have gotten worse," Ruby says. "My legs and feet are numb, I'm light-headed and I stutter. When I'm trying to get my work done, sometimes I have to quit. I get awfully tired but I don't sleep well. It's really torn my life apart.

Food tastes funny to me. I have to be careful of where I place my feet because sometimes I fall. I even fell down in the last week and damaged an artificial hip. I stumble all the time. I have pain in my shin bones. I am unable to do things I used to do because I feel ill all the time.

More DENTURE CREAM News
I started using denture cream as soon as I got dentures, in 1973, because the bottom plate would not stay in place. I used the denture cream as much as three times or more a day. In May of this year, my daughter saw something on television about the denture cream, so I stopped using it. Nothing has improved since then, but I haven't been off of it long enough. I don't know that it gets out of your system over time or if it gets worse even if you stop using the cream.

Also, I have spells that—I don't know if it has to do with the denture cream—I just start shaking for no reason at all. It gets really bad. The shaking doesn't last long, but it is miserable and the next day I'm sore. When I had my last shaking episode I had that denture cream in my mouth.