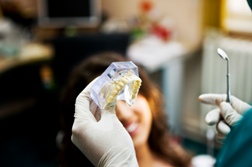 GlaxoSmithKline and Proctor and Gamble were both sued in courts in British Columbia and Saskatchewan for allegedly failing to properly warn consumers about the dangers posed by the amount of zinc in popular denture creams Poligrip and Fixodent, according to a news release.

The side effects of denture creams with zinc were not known until relatively recently.

More FIXODENT DENTURE CREAM POISONING News
"The dangers went undiscovered because the symptoms were thought to be age related. The symptoms are serious and debilitating…tremors, tingling, paralysis, numbness, problems with balance and muscle weakness," said one of the lawyers filing the denture cream lawsuit.

According to the release, earlier this year GlaxoSmithKline voluntarily decided to stop making three varieties of denture adhesive that contained zinc.

"The zinc helps the dentures to stick to the gums…the highest zinc levels were found in Super Poligrip. The companies have placed warnings and recognize the dangers," the attorney said.

Dr. Teresa Graedon and Joe Graedon, writing in the Seattle Times, said that taking too much zinc can lead to a copper deficiency, which can cause anemia and neurological problems.

If you or a loved one have suffered losses in this case, please click the link below and your complaint will be sent to a drugs & medical lawyer who may evaluate your Fixodent Denture Cream Poisoning claim at no cost or obligation.
Request Legal Help Now