Fixodent Zinc Poisoning: How Much is Too Much?

Lee Russo, 43, says she had no idea that the denture adhesive she was using was harming her health. Yet Russo, who began using denture adhesive zinc at the tender age of 39, now requires a cane and has even started wearing leg braces. 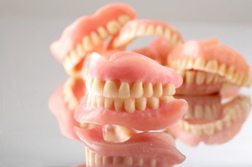 Russo's problems began four years ago. According to a story published in the Philadelphia Daily News on 3/10/10, she noticed an occasional tingling and numbness in her feet. Healthy in every other respect, Russo ignored it. However, things soon got worse.

Russo began falling down. "Sometimes I was so weak I couldn't get out of bed," she said. "I suffered. For a long time."

At the time, Russo was going through about a tube of Poligrip each week. She also kept a small tube of Fixodent in her purse. She used as much product as she felt she needed to keep her dentures in place, with more on the bottom, given that the lower plate was a little loose.

Zinc has long been a common ingredient in most denture creams, as it helps hold the dentures in place in the mouth. Many denture wearers who can't afford to have their dentures repaired or replaced often resort to using excessive amounts of denture cream to keep them snug.

The question is, how much is excessive? And did denture wearers know that excessive amounts of denture adhesive can be harmful?

Zinc and copper are both important to good health, but balance is key. A zinc overload provides a double whammy, as unreasonably high levels of zinc deplete copper levels in the body. The result can be devastating.

Various lawsuits against GlaxoSmithKline (GSK), the makers of Poligrip and Procter & Gamble, which manufactures Fixodent, allege that the manufacturers knew all along about the risk of zinc poisoning, but did little to educate the public about the risk. A major neurological study published in 2008 finally put the spotlight on the issue, and late last year GSK began indicating on denture packaging that even small tubes of the product—about 0.75 ounces, on average—are intended to last up to three weeks.

More FIXODENT DENTURE CREAM POISONING News
Lee Russo told the Philadelphia Daily News that she had no idea. "The whole point of denture cream was to put it on so dentures stayed in your mouth," Russo said. "Their 'too much' may not have been my 'too much.' Unless you came to my house and said, 'Use this much,' it's the only way I'd know your 'this much' and my 'this much' was the same."

GSK undertook a voluntary recall of Poligrip EX in Japan last week, and a month ago announced that the manufacturer would no longer use zinc in its denture adhesive products "due to the literature and increasing case reports we were seeing," said a spokeswoman.

That's all too late for Russo, who attempted to re-balance her zinc and copper levels by taking copper supplements. Her blood has returned to normal, but her life is no longer the same.

"Everything has changed for me," she said. "I can't work. I can't take care of myself. My children hurt. My husband hurts. I hurt. I don't want this to happen to other people or have their families go through this."

Posted by
laurie leonard
on August 10, 2017
What blood test should i ask my Doctor for?
Posted by
misty green
on April 22, 2016
i have been usein fixodent for 4 years now i have some bad thing going on with my body now and i have not seen a dr yet i know it is from the fixodent