First Unum (formerly UnumProvident) will likely cause Greg to sell his house, and possible take his daughter out of college: even though Greg's doctors have deemed him unable to work, Unum's doctors say otherwise—Greg just received his last long term disability check from the insurer and social security is a long way off.

Greg worked in the mortgage banking field for 27 years. Due to his medical condition, he cannot continue his previous job as regional sales manager. "Unum expects me to get another job yet how can I switch careers at 58 years old?" Greg says. It's not easy finding a job, period. It's even harder when you reach middle-age. " Potential employers have no idea how old I am when I phone, but when I get to the interview, they wonder how to get out of it," says Greg. 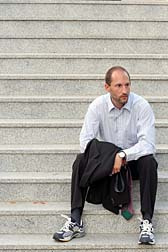 "I worked for one of the major banks in the country and had to travel a lot, attending regional meetings," says Greg. "Right out of the blue I started to get vertigo and couldn't get out of bed because I was so dizzy. My boss told me to call HR and they set me up with a doctor who then sent me to a specialist. I was diagnosed with Meniere's disease—an inner ear imbalance that is progressive—meaning I am just going to get worse. And I have the worst kind because my hearing loss is bilateral."

Greg had problems with Unum right from the start. He was eligible for short term benefits but didn't receive a dime until his LTD was approved, which meant that he had to wait a few months without any income. He also has diabetes: the stress from waiting caused his blood sugar level to skyrocket.

"I collected LTD from Unum for almost two years and at the appointed review time, the disability benefits specialist said I had to find another job or they would find a suitable job for me—but it has to be at the same pay rate as my previous job," says Greg. "I assumed I would be covered by Unum until social security kicked in when I turn 65...

"Finally Unum called me last month and said they haven't found a job for me. At around the same time, the end of April, the disability benefits specialist called back and said that, because I wasn't taking a particular antivert (Zanax) that keeps you from getting dizzy, and because my doctor did not need to see me for another year (there is nothing he can do anyway), I was obviously getting better! (They also say that I am able to lift a 20 lb weight but due to all the stress they caused and my diabetes getting worse, I have what is called diabetic shoulder — frozen shoulder—so I can barely lift anything.)

More News
And the reason I didn't take Zanax is because it is extremely addictive—my wife is a drug and alcohol counselor and she sees countless people addicted to this drug. I take an over-the-counter drug instead.

They used these two reasons to deny me.

But they had not even spoken with my doctor. Neither did they send me to their own doctor. Instead, their doctors just looked at my medical records and made their decision.

Unum finally had a conversation with my doctor. He provided all the appropriate materials they requested but I have not hear back from Unum since — that was one week ago. Meanwhile, I have spoken with a lawyer and if I don't get satisfactory results soon from Unum, my next step will be to file an appeal and I will probably end up with a lawsuit against Unum.