Unum Said They Own all My Social Security

Lu had an accident that destroyed his right shoulder, ruptured a disc in his neck and damaged his other shoulder. As a respiratory therapist, his doctor certified that he was unfit to work. As well, he had four opinions from specialists, all with the same prognosis; nothing could be done. So Lu went on short-term-disability (STD) through his First Unum policy.

"When I fell, my arm just happened to be in the wrong position. At first it was completely numb and I didn't think much of it, hoping it would just come back to normal. But next day I was in the hospital. Surgery failed ---it was too massive of a tear. I was only 50 years old and found myself on medication for depression and anxiety. I didn't even feel like a person—I couldn't work, I couldn't participate in sports. My boat just sat there because I couldn't use it. I didn't know how to fill in my time except take pain killers and go to pain management. Then I was put on fentanyl patches but had bad reactions so stopped taking them. But I am still on pain meds. 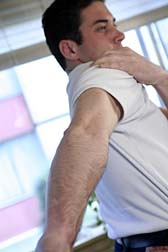 After three months, my STD ran out so I applied for long term disability benefits (LTD) at First Unum. They were very cooperative and sent my checks in a timely manner.

I also filed for social security: the accident happened in 2005; it took two years to get approval and my first check arrived in September, 2007. I got retroactive pay from when I filed. Unum was supposed to adjust my check accordingly. But they failed to send me anything so I got behind on my bills and mortgage. They said it was being adjusted. The check finally came in September but I didn't get a September payment - they still owe me $2,000.

When I told Unum that I was collecting social security benefits, they told me that I would receive a lesser sum. My check went from just over $2,000 per month to $700 per month. I am entitled to both these benefits but this is what happened:

Unum immediately demanded that I pay back the entire sum of my social security - all my back pay. I went to a lawyer and got his advice. Apparently Unum can ask for the money back because you cannot collect a large sum at the same time so I was already a month behind on everything and I used part of my social security check to catch up. When I called Unum to question the amount of money I owe from social security, the answer was 'every penny' so this went on with the adjusted income until December.

Two weeks before Christmas I didn't get my check. They told me I wouldn't receive anymore LTD until the social security is fully paid.

I collected social security for four months, along with the retroactive pay. I was honest and told Unum; I had no idea that I couldn't collect both at the same time. My lawyer says that I can collect both up until a certain cap of $2,000 total. So now, Unum pays out $700 and social security pays out $1,300. But I haven't received a check from Unum since November.

Unum should have been sending me $700 per month. They have stopped cold until 2010. So we're probably going to lose our house next month. We can't pay the taxes on the house and we are reduced to eating from a food pantry.

You don't feel like a person; my life has changed completely where I absolutely have nothing. Nobody at Unum cares; they don't want to hear. I asked them for a payment plan and they told me they are not a bank. They even did a credit check on me. So that is where we stand: homeless soon. We have animals—a few cats, a dog and a parrot—hopefully we can find them some shelter.

More News
Unum even billed me for the education that I went for—computer classes. They told me not to worry about it; they will find me a counselor and get me a new job. Instead I got a bill they tacked onto the social security I owe them that now totals $28,000. And I'm getting nowhere. They won't even give me a copy of the policy. Even my lawyer asked.
It is disgusting that they cannot come up with an arrangement for me to pay them back."

We fell between the cracks: made too much for welfare and can't get a loan.We are literally between a rock and a hard place. At first I though Unum was great but now, when they cut me off 100 percent just before Christmas, they screwed us."

Lu is just one of thousands who are denied claims by Unum every year. But if you have been denied disability benefits from Unum, you likely have a claim. In November, 2002 charges were filed against Unum stating that it has "illegally victimized, and continues to victimize, many thousands of disabled Americans". Lawsuits are continuing.