"In August of 2003 I had a bleeding disorder a host of other symptoms," says Harris (not his real name pending a lawsuit). In January of 2003, just prior to getting deathly ill, I got hairy tongue and, although it isn't a symptom of HIV/AIDS, I decided to be tested anonymously anyway-- the results were negative." 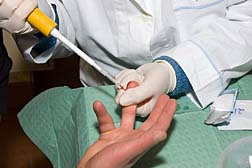 (Anonymous testing maintains the privacy of the patient: Harris decided to be tested anonymously because insurance companies have been known to deny benefits to someone getting tested for HIV/AIDS.)

"As it turned out, I was later diagnosed with HIV: it was a particularly aggressive strain and I was hospitalized. As a result of my diagnosis, my treatment would require three months in hospital. I filed for short term disability benefits in August and received benefits from Unum for six months. It was understood that I would continue to receive short term benefits until long term disability (LTD) would kick in. I had filed all the necessary paperwork and my employer told me that I had been approved. Consequently, I was terminated from my job because I had been approved.

On April 6, 2004 I received a letter from Unum denying my LTD claim. At this point I had no other income and the disease would become chronic—for the rest of my life.

The reason for denial was because I was treated for a condition called 'hairy tongue' which my claims representative told me was a symptom of HIV. But nowhere in the Merck manual does it say that hairy tongue is a symptom of HIV. And nowhere in my medical records (dated May 15, 2003) was there a diagnosis of any HIV/AIDS-defining illnesses. At the time I was treated for hairy tongue I was also negative for HIV. But Unum made their own medical leap—stating that hairy tongue was in indicator of HIV and AIDS. If I had symptoms that were indicative of HIV, my doctor would have this on my medical record but she saw no symptoms of HIV and had no reason to ask.

I found out that hairy tongue typically results from too much bacteria in the mouth. It can appear by drinking too much coffee and smoking. I happen to be a smoker and drink coffee.

In all these years of communication I have had with UNUM, I never spoke to their physician. Their medical department said that I had an AIDS- defining symptom but my claims rep interpreted hairy tongue as hairy leukoplakia - which can often be a first symptom of HIV.

They are denying me "a normally prudent person would have consulted a health care provider." But I did consult a doctor and the doctor said I had hairy tongue because I was smoking and took antibiotics at the time.

Through your website I signed up for your newsletter and found information about a lawsuit against UNUM that reviews all denied claims going back to before 2003. It has taken me until May of this year to find out that my claim is under review. I received one phone call from Unum asking me questions regarding whether I had documentation on my HIV test in March, 2003. But I did it anonymously and I don't have documentation.

So now I am officially on social security disability and I was able to get state insurance paid for by the state of Indiana for high-risk patients. I have encouraged my employer to talk to Unum. After all, I was terminated because Unum told them that my LTD was approved.

More News
At this point I am in the process of seeking legal assistance. I had to stop the process of legal action against Unum during the reevaluation of my claim—a one-page waiver I had to sign before Unum would review it. However, that doesn't mean I can't seek legal advice - I just can't file anything until I get the assessment back from Unum. This has now been four years and I am owed over $100,000. And I should be receiving $2,400 per month. Unum owes me a lot of money.

I think Unum is taking their time to decide whether it is more risky for them to deny me and have a civil action brought against them or more beneficial to simply pay the claim. Or maybe they are hoping I will simply die before this is resolved. My doctor suggested that because I had a new strain of HIV I could possibly die within a year. If not for family and friends, I would have lost everything.

If you have had a disability claim denied, or if your claim was granted and then later terminated, please contact a lawyer involved in a possible [Unum Lawsuit] who will review your case at no cost or obligation.
Request Legal Help Now