Tracy suffers from fibromyalgia—a chronic disorder that includes debilitating fatigue, sleep disturbance, joint stiffness and many more symptoms. But Unum sees fibromyalgia syndrome as a "non disease", possibly due to a lack of objective laboratory tests or medical imaging studies to confirm the diagnosis. But for Tracy and many others, it is very real. She was initially approved short term disability benefits from Unum and collected long term disability until they cut her off, with one week's notice. 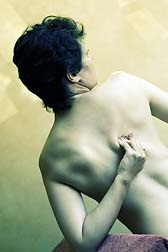 "On my anniversary-- Sept 19, 2006--I was in a very bad car accident and suffered double whiplash, a fractured T11 and nerve damage with fibromyalgia ," says Tracy. "I originally applied to Unum for short term disability and was approved for 13 weeks then I started to receive long term disability benefits.

In October 2008 I had to see Unum's independent medical examiner (IME). He concluded that I was exaggerating and could probably do secondary work with limitations such as no walking for a long distance, sitting on a chair for short periods of time and not lifting anything over 20 lbs.

I was an executive assistant for 14 years—it required a lot of walking and lifting such as heavy palettes of water and huge reports weighing well over 20 lbs and basically a lot of running around. How could I go back to my old job?

The IME put me in this room and made me wait almost two hours. Then someone came in and said she didn't have all the paperwork on my history but went through whatever she had with me. Then the doctor came in 30 minutes later and went over my history all over again. Then he did some mobility tests such as how far I could move my neck and how far I could bend down. I was already in pain because I can't sit for too long. They didn't say anything—just dismissed me.

Not long afterward I got a letter from Unum saying they would review the IME report. They were supposed to reach a decision by January 6. Then they sent another letter saying they needed another 45 days to review the case.

My Unum rep called me around the end of Feb and said I was denied any more benefits. I told her I was diagnosed with fibromyalgia and would have it for the rest of my life and it was due to the car accident. I have a tremendous amount of pain that goes through my legs.

When they denied me it was because of the IME report and from a letter sent by Sherry Hill, my chiropractor. This is why I need an attorney—I still have another year plus left to collect LTD and Unum owes it to me. I have no income coming in. I have applied for social security but they take 90 days to respond so I have to wait until May 8th for them to reach a decision. Meanwhile I am so anxious and also disgusted by the way Unum has treated me. Unum doesn't believe that fibromyalgia is an illness but my doctor has told me I cannot return to work. Sometimes I have terrible muscle spasms and some days I can't even leave my house.

My lawyer told me to get all my medical reports together and he is going to appeal my case with me."

Tracy has a good chance of winning a case against Unum.

In 2003, UNUM Life Insurance Company of America, the insurer and plan
administrator, initially awarded long-term disability benefits to Robert A. Morgan on account of his fibromyalgia and insomnia. But after conducting surveillance of Morgan's activities the following year, UNUM terminated his benefits based on surveillance of his activities. Morgan then filed suit against Unum under ERISA. The district court for the District of Minnesota reinstated Morgan's disability benefits, awarded him past-due benefits with accrued prejudgment interest, and awarded him costs and attorney fees.

More UNUM News
terminate Morgan's disability benefits in August 2000. When UNUM initially
awarded Morgan benefits in December 1999, having determined that he was disabled
since March 1999, UNUM already knew through its investigation of Morgan's
application for benefits that he routinely engaged in the type of activities that UNUM
later observed through surveillance and used as the basis for discontinuing his
benefits…. UNUM's surveillance--showing Morgan driving his car, eating lunch at
a restaurant, carrying light objects, sitting and reading, and stretching and doing light
aerobic exercise at the gym for about forty-five minutes--revealed nothing new and
was not substantial evidence supporting UNUM's decision to discontinue Morgan's
disability benefits."