One tactic that Unum Provident employs to deny countless Unum long term disability claims is to invoke the pre-existing conditions clause--usually defined as any health condition you already have --including an injury that happened prior to the effective date of the insurance--when you enroll in a health insurance plan or policy. Or Unum Provident may deny health insurance altogether due to a pre-existing clause—and that may be a federal offence. 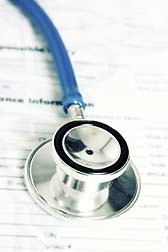 For instance, individuals cannot be denied health care coverage for a medical condition as a result of a genetic marker for the condition. The Health Insurance Portability and Accountability Act (HIPAA) clearly forbids a group health insurance plan, including Unum Provident, from using genetic information to establish rules for eligibility or continued eligibility.

- You received medical treatment, consultation, care or services including diagnostic measures, or took prescribed drugs or medicines in the 12 months just prior to your effective date of coverage; or

- You had symptoms for which an ordinarily prudent person would have consulted a health care provider in the 12 months just prior to your effective date of coverage; and

"I suffered a back injury in 2003," Cheryl says, "and in 2004 I received LTD payments from Unum. In the meanwhile, my company laid me off. In July 2004, my condition improved so much that I looked for, and found another job. I started working in August against my physician's advice and at the same time I informed Unum Provident, and they stopped payments.

"I got a new LTD policy with my new job, again with Unum. Within 6 months after termination of the previous LTD payments, my back problem returned and I asked Unum for LTD payments. However, Unum does not see this disability as a continuation of the previous case; instead they consider this a pre-existing condition. This way of acting punishes the honest (I voluntarily tried to work again, could have collected benefits longer otherwise). This policy is one-sided, and takes unjust advantage against the customer, de-motivates employees, and does not leave a real chance to get back to work…"

Unum continues to practice bad faith despite getting its knuckles rapped to the tune of countless lawsuits, mainly settled out of court.

You Can Get Help
Both federal and state governments protect individuals from unreasonable denial of health insurance benefits for pre-existing conditions. In 1997, the HIPAA, or Health Insurance Portability and Accountability Act, was passed by the federal government to protect consumer rights with regards to pre-existing conditions for health insurance.

More UNUM PROVIDENT News
The HIPAA limits the time that an insurance company can deny benefits to a policyholder for pre-existing conditions for health insurance: this time period is typically between 12 to 18 months after the date a policy becomes effective. After this time, the HIPAA requires that a person be covered for pre-existing conditions.

A health insurance attorney can help determine if Unum Provident has acted in bad faith by denying pre-existing conditions, and more.

Posted by
Brenda
on February 27, 2014
I am going to be receiving STD hopefully, and this will be my third time dealing with unum. Also Unum manages our claims but doesnt pay them my employer does. My second claim was due to a knee injury off the job that required surgery. My knee has never been right and I have complained that there are fragment/s of cartilage moving around in there. My surgeon ordered another MRI and before I had my appointment to bring the MRI to him I tripped and fell at work receiving a nose contusion or small fracture, cut lip, and fell on both knees. I couldn't put any weight on my bad knee after the fall. My supervisor took me to the ER and I was to follow up after weekend. I already had an appointment with my surgeon and he right away determined my knee was not injured from the fall. The doc and staff were very busy and aggravated because my case became complex. I was told from now on to make completely different appointments on different days in the future one for one knee and one for the other?????
Anyway about unum, this docs staff hates to deal with unum period and would probably love to get rid of me as a patient. I have an account set up with unum to upload paperwork and am always careful about anything I send them. They told me I could sign a form giving them permission to get my records from my surgeon as to why Im off work. I wont sign because this is what their electronic form is asking:

Sign and Complete the Document
Please review the document and click I ACCEPT at the bottom of the page to complete the Authorization form submission process.

So that Unum may evaluate and administer my claims, including providing assistance with return to work. For such evaluation and administration of claims, this authorization is valid for two years, or the duration of my claim for benefits, whichever is shorter. I understand that once My Information is disclosed to Unum, any privacy protections established by HIPAA may not apply to the information, but other privacy laws continue to apply. Unum may then disclose My Information only as permitted by law, including, state fraud reporting laws or as authorized by me.

I also authorize Unum to disclose My Information to the following persons (for the purpose of reporting claim status or experience, or so that the recipient may carry out health care operations, claims payment, administrative or audit functions related to any benefit, plan or claim): any employee benefit plan sponsored by my employer; any person providing services or insurance benefits to (or on behalf of) my employer, any such plan or claim, or any benefit offered by Unum; or, the Social Security Administration. Unum will not condition the payment of insurance benefits on whether I authorize the disclosures described in this paragraph. For the purposes of these disclosures by Unum, this authorization is valid for one year or for the length of time otherwise permitted by law.

Information authorized for use or disclosure may include information which may indicate the presence of a communicable or non-communicable disease.

If I do not sign this authorization or if I alter or revoke it, except as specified above, Unum may not be able to evaluate or administer my claim(s), which may lead to my claim(s) being denied. I may revoke this authorization at any time by sending written notice to the address above. I understand that revocation will not apply to any information that Unum requests or discloses prior to Unum receiving my revocation request.


IMO this is absolutely ridiculous. I called HR of our Fortune 500 company who said she had been on STD twice and she saw no reason not to sign it, that they ask for all that info but dont use it??????