Yet Another Unum Lawsuit Seeks Damages, Back Payments

Yet another Unum lawsuit has been filed alleging unfair practices and denial of benefits by an insurer known for chronic denials, according to details of an action filed August 31 in the United States District Court for the Middle District of Pennsylvania. 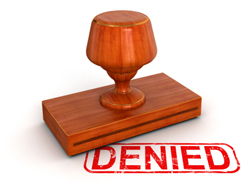 Plaintiff in the case is Joseph J. Costello DPM, a licensed podiatrist whom, the Unum insurance lawsuit states, historically performed anywhere from 75 to 100 surgical procedures per year until a disability prevented his continuance as a surgeon. The plaintiff notes in his complaint that he was forced to drastically cut back his hours as a result.

According to the lawsuit, Costello was covered by "presumably three" disability insurance contracts with Unum—one of which accompanied the disability insurance lawsuit as filed. The accompanying document shows a policy that has been in force since 1992, with annual premiums showed at a level of $1,923.64 starting the year in which the policy was in force, before dropping slightly by 2015, and to a 'company rate' by 2025.

The defendant, Unum, counters that Costello has three separate claims pending. Two have been denied while a third, according to the defendant, is under partial payment.

More UNUM News
The plaintiff states in his claim that he is owed in excess of $100,000 in back payments from the three Unum long-term disability insurance contracts in question. He is suing Unum Life Insurance Company of America for a sum in excess of $75,000 plus interest and costs.

Unum Group, known at various times as Unum Provident and First Unum, has been dogged by a history of claim denials. Over the years there have been accusations of systematic denials, regardless of the legitimacy of claims. Various allegations have held that Unum encouraged employees--and in some cases required claims handlers--to mine client lists for claims that could be denied or stonewalled in an effort to avoid payment regardless of the status of the policy.

Click to learn more about LawyersandSettlements.com
LawyersandSettlements.com is an online news and information site for the general public and legal community. As a legal news resource, we have emerged as an independent & trusted voice. We provide detailed and quality information on various lawsuits filed including Insurance Cases, Consumer Frauds, and Financial Cases.