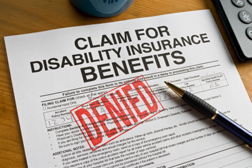 According to the news provider, Laura Kieffer claimed in her lawsuit that that she had been wrongfully denied her disability benefits by Paul Revere Life Insurance Company and parent firm Unum Group Corp.

Kieffer, who is a dental hygienist, said that she had been paying premiums on the policy for 12 years after purchasing the disability insurance policy. In 1996, she allegedly developed a number of disabling medical conditions that caused her to stop working in 1999, her lawsuit claimed.

According to Kieffer's attorneys, Unum eliminated Kieffer's benefits in March 2008, despite the advice of her treating physician. Kieffer was awarded punitive and compensatory damages, according to the news source.

Unum responded to the verdict saying it was disappointed and that it could potentially appeal, the news provider said.

Unum Group Corp. is headquartered in Chattanooga, Tennessee, according to the company's Web site.