More UNUM News
Insurance provider Unum Group announced recently that it has hired Martin McGuinness, a former intermediary to the House of Representatives under George W. Bush, to be its new vice president of government affairs the Associated Press reports. 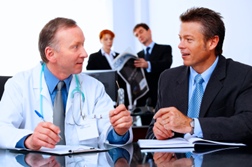 Most recently, McGuinness was the vice president of federal affairs for the American Insurance Association, and his previous work history includes various legislative positions with a number of Congressional members, the news source said.

McGuinness earned a bachelor's degree in political science from George Mason University as well as a master's in legislative affairs from George Washington University. He is expected to join the Chattanooga-based company later this month, according to the news provider.

"I'm thrilled to have the opportunity to join this industry-leading company," McGuinness said in a statement. "Federal legislation and regulation continue to have an increasing role in financial services, and I'm looking forward to helping Unum engage in Washington in a positive and productive way."

According to the company's Web site, Unum is one of the "world's leading benefits providers" and offers disability, long-term care, and life and voluntary insurance products.