Jane R. has appealed her case to Unum twice. She has asked them what rules they abide by? "In Unum's policy book it states they follow all the federal, state and ERISA rules where applicable and they have the ability to change pretty much anything with my policy," she says.

Unum has yet to come up with a legitimate reason as to why she was cut off from her long-term health benefits (LTD). Her injury occurred at work in 2004, and by August 2007, she had written two appeals to Unum. 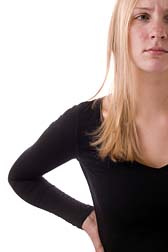 Jane can't understand how could they deny her when she gives them the facts. "When I was denied the second appeal, I got on the internet and read so many other people's stories regarding Unum. I realized that I didn't understand what I was taking on—how many others have been denied and a big class action suit a few years ago involved reviewing thousands of denials."

This is what happened to Jane R.

"I am a registered nurse. In April, 2004 I was working on the floor and there is a clerk in an office area who is rather territorial, she has a chip on her shoulder. My clerk sits next to her and she has two chairs. I sat on the floor and did my work. Around lunch time she was gone so I sat on one of her chairs — my clerk and I were side by side. I had to pick up something and when I went to sit back down, the chair was gone —I fell flat on the floor. I tried not to get mad — she had pulled the chair away from me on purpose. She offered to buy me an ice cream cone!

I told both clerks that I had to go to HR and fill out a safety report. I was really shaken up and my back started to hurt. The next morning my manager read the report and asked if I had called security. 'No, I just needed to get an incident report in,' I replied. I tried to work the next few days but I was in severe pain.

A few days later, they put me on light duty and I saw a workers' compensation doctor. My hours were cut back: I was full time and usually did about 16 hours overtime. Now I was working less than 40 hours a week: anywhere from 20 to 30 hours. One week I wouldn't go in at all. This doctor prescribed physical therapy and pain meds and muscle relaxants. I was also on short-term disability which made up for the hours that I couldn't work. In other words, I was still getting paid a 40-hour week but no overtime. I would have chosen not to work at all because I was in so much pain.

I didn't know the workers compensation systems and my rep at the hospital wasn't too much help: around August of 2004 I saw the workers comp doctor and I was put on MMI — maximum medical improvement — meaning that I wouldn't get better. I was told to gather my things, go home and I wasn't going to get paid anymore; there was no more work for me.

I had worked at this hospital for two years. Before they put me on MMI, they asked me to do light duties and take the place of this clerk because she was on a mental stress leave—the woman who pulled the chair out from under me. How ironic!

I got a workers compensation lawyer who told me right away to switch doctors. Another doctor gave me an MRI that showed a large herniated disc. I have done so many different therapies and three epidural shots — nothing alleviates the pain.

I filed for LTD with Unum and I filed for social security. In May of 2005 Unum told me that I was eligible for LTD and I would receive retroactive benefits from February, 2005.

During the next few months, I stayed in bed and slept most of the day. By August I was diagnosed with depression due to my physical injury. I believe that Unum was more than happy to put that on my record; with this diagnosis they only had to cover me for 24 months. If they covered me for the real issue — my back — I would have received LTD benefits for a lot longer.

In my second appeal, I wrote specifically how I performed my ADLs' — activities for daily living and how my herniated disc has affected my ADLs.

Unum has never been given any information on what I need to appeal. Their policy book is jammed with inconsistencies — I need a good lawyer."

Posted by
Jerrie Chambers
on September 13, 2011
I am also going through the same thing and have been denied twice. I am looking for an attorney as well so keep me posted and I will with you. I have an attorney in Council Bluffs Iowa with a lawsuite against my company for a workers comp and of course we use Unum as well so battle is on and they are also trying to say my depression is the main thing not the injury!!