Frank didn’t know that a court had already ruled against Unum in a case of Fibromyalgia Disability Denial. But Frank’s attorney is likely aware of the case and has advised Frank to appeal. 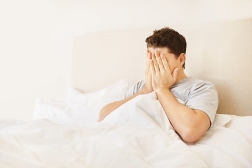 Frank, age 60, had to cut his career short after a fall two years ago that left him unconscious and hospitalized. Since that injury, he suffers from chronic pain and fatigue and has been diagnosed with fibromyalgia. Frank’s rheumatologist believes he is also developing rheumatoid arthritis. In other words, Frank is completely disabled, but Unum Group doesn’t see it that way.

“I was a consultant for pastors and their churches and a lot of travel was involved,” says Frank. “As a result of my condition, I wasn’t able to fulfill my job obligations. My employer recommended that I consider long term disability and they submitted that information to Unum.

“I filed a Unum disability claim last May 2012 but Unum just recently denied me. My doctor referred me to a number of specialists, and every time they sent the insurance company a report, Unum said that I had to wait another 30 days so they could get more information from the specialists.”

Making Frank wait month after month sounds like a typical stall tactic frequently used by Unum. For an entire year, Unum never gave Frank a definitive answer; they just left him in limbo. Then about two weeks ago, Frank received an official letter of denial.

“Unum said my claim was ‘closed’ due to insufficient medical disability which could not be tested by a lab, not tested by x-rays or blood tests. They also said my doctors’ opinions are subjective, concluding that there is ‘not sufficient evidence to support the claim,’ but in their last correspondence, Unum only took into account my medical records from May through July 2012, and since I didn’t have another fall or episode of unconsciousness, I didn’t need to have a medical disability.

“At the end of the day, they didn’t consider eight months of medical records produced by five other doctors. But for the past 18 months, I have been taking care of myself to make sure a similar accident (like my fall) doesn’t happen again, and I am doing everything the doctors tell me. If I went to work in this mental fog and chronic fatigue, I could potentially pass out 30,000 feet in the air.”

Frank says that he connected with an attorney at LawyersandSettlements because he intends to appeal Unum’s decision. He has researched disability denials and found out that social security used to deny claimants with fibromyalgia and chronic pain but it is now recognized as a legitimate illness. Further, since the late 1990s, the medical community and courts nationwide has been aware that fibromyalgia is a diagnosable condition.

More UNUM News
Many courts have awarded disability benefits under ERISA for fibromyalgia. (Lang, 125 F.3d at 799; Godfrey v. BellSouth Telecomm., Inc., 89 F.3d 755, 759-60, noted that “fibromyalgia can be severely disabling and can only be diagnosed by an examination of the patient.”) And in 1999, in Elaine Russell v. Unum Life Insurance of America, Dr. Riley, Russell’s doctor, concluded that she suffers from fibromyalgia. Instead of arguing his medical opinion with their Independent Medical Examiner, Unum chose to have two registered nurses review Russell’s file and ignore Riley’s report. Under the standard to review in this case, the court found that Unum abused its discretion in denying LTD benefits to Russell.

Frank has never been examined by one of Unum’s medical examiners. And Unum’s decision to ignore fibromyalgia as a disability likely won’t bode well with a jury. Meanwhile, Frank’s medical bills are eating into his savings, which is all he and his wife, a chef, have to live on. “We took a loan from our retirement so you don’t have to pay taxes as long as you pay it back on a monthly basis and that has kept us from losing our house,” adds Frank. “I’m thankful that I found a disability insurance attorney who is taking my case and we are going to start the Unum appeal process next week.”

Posted by
Rachel
on June 5, 2013
Actually, there are tests for Fibro -they are just expensive. A newer blood test checks for a couple of corticosteroid steroid stress-mediating hormones that are low or missing in Fibro people. It was in the news in May (search google news for Fibromyalgia test). Also, Substance P (for pain) is high in Fibro folks. Then, in fMRI research has shown that the level of pain can be correlated with certain brain activity. It's just cheaper and more straightforward to check for trigger points and other symptoms.

It's sad how businesses lack integrity these days. Keep fighting!

Posted by
Saray
on June 5, 2013
I suffer fibromalyia chronic pain arthritist inflamation in the brain unum is giving me the run around
Anything so they do not have to pay
I have suffered since 2008