In August of 2004, Dave was deployed to Iraq, where he served as pastor for one year. Upon returning, he was placed on medical hold status due to ruptured ear drums. Later, he realized that he was also suffering from PTSD, so he filed for disability benefits with Unum, but was immediately denied because of UnumProvident's "War Combat Exclusion" clause… 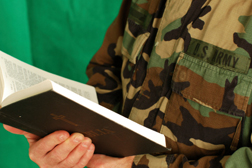 "Unum told me that appealing my claim would be a waste of time so I didn't take it any further," says Dave (not his real name), "until I read an interview online from another Gulf War Veteran suffering from PTSD and Unum had also denied his long-term disability benefits.

"I had served in the US army for over 20 years as a National Guard reserve officer chaplain. The denomination I served with used Unum as their disability carrier, so the church would pay the premiums year after year as part of our insurance policy, including health and disability policies."

When he returned from Iraq, Dave was also going through some emotional issues, so he sought counseling and was diagnosed with Veterans PTSD, which turned out to be why Unum denied his claim, but that comes later…

Apparently, Dave's church—his employer—decided to "go in a different direction" and didn't want to accept him back as their senior pastor. "When church members found out that I was suffering from PTSD and in counseling, I guess that wasn't very reassuring for them," Dave explains, "so I accepted a call to another church within the same denomination, and Unum was the same insurer.

"I served with this church for two years, until the church board asked me to resign. You know how people dance around things rather than saying it? I believe that a church member accessed my records at the VA and he told the church counsel that I was receiving treatment for PTSD and taking medications. Was it my paranoia speaking or reality? I really don't know, but I went to the VA of records and requested a search to see who had accessed my med records, but they were unable to trace anything…"

Regardless, Dave filed a claim with Unum for disability benefits. "They looked at my claim and said, yep, we believe you have PTSD but we are going to deny your claim because of the war combat exclusion clause," Dave explains. "If the injury is due to combat, Unum doesn't have to pay. They said I could appeal but it wouldn't change anything.

"That's a real tough deal. Church is tough but combat is tougher because that totally shut the door for me to be accepted as a pastor, for everything I have been trained for. I have an MA and MDIV (Master of Arts in Theology), and 24 years of experience. Yet the denomination now believes I wouldn't be suitable as a pastor because I was diagnosed with PTSD. Of course they choose their words carefully so they won't be liable.

"I have been with people in the combat support hospital and troop medical clinics: As a chaplain I went to whoever was injured. I treated people who were pulled out of burnt vehicles and I saw a lot of body bags. Before I went to Iraq I never had any mental health issues—I never thought it would affect me like this…I still have terrible nightmares and sometimes get shaky. On one hand I don't want to feel the pain; I've become emotionally distant and detached from my family, which doesn't make for a very good pastor. I can't fault the church for what they did, but I do fault Unum because that is why you buy disability insurance.

More UNUM News
"So Unum basically says, Goodbye and God Bless. I didn't get an attorney to help with an appeal; instead I started looking for work. I was able to find a job working at the VA with wounded soldiers, suffering all kinds of injuries, including PTSD. I don't work as a chaplain anymore; I work as an advocate. You can't imagine how emotionally painful it has been, being told that I can't use my bible, I have to shelve it.

"I have been receiving benefits from the VA and that obviously continues to this day. I also receive counseling from the VA and I am very appreciative, but the VA doesn't pay much.

"Unum has kicked me into the curb. Unum apparently uses certain word phrases for laymen rather than attorney phrases so they can interpret them to work to their advantage, and in this case, the wartime exclusion clause was in very fine print.

"If an attorney were to take my case now, I would go through the appeals process. Unum still took my money for two years after I returned from Iraq. To their defense, Unum would say they didn't know, but they didn't offer to refund my premiums to the church."