Bad faith insurance couldn't get much worse than denying benefits to a Gulf War veteran suffering from post-traumatic stress disorder (PTSD). But Jason, who is disabled with PTSD and fibromyalgia, says that Unum did just that: "Unum wrote me a letter that included a list of jobs I could get, then[UnumProvident] cut me off after two years on long term disability." Jason applied for Unum benefits after his panic attacks and anxiety became so bad that he couldn't function anymore. VA doctors determined that he also had liver failure, possibly anxiety-related. 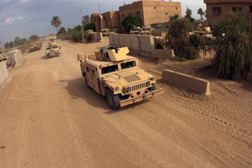 He went to a Veterans' PTSD rehab center and also had psychoanalysis treatment to try and understand why he was having memory problems. In other words, Jason wasn't able to work, period.

"I also told Unum that my unit had been exposed to nerve gas in Iraq," says Jason. "Before we blew up a demo depot, someone forgot to check the depot to see if it had gas—we were downwind when the Americans blew it up. The Pentagon sent me a letter that said our unit had been exposed to the gas—so it's documented; it's evidence. Later I found out that a high incidence of brain cancer and fibromyalgia occurred. Some of the guys from my unit are sick with other stuff, including joint pain.

"Anyway, my job was to drive gas trucks and follow the tanks. I was the gas station attendant on the battlefield; the guys in the tanks would radio me to get filled up. When I came home my PTSD broke out—I stayed awake for days and had massive panic attacks. At first I got short term disability benefits from work then Unum kicked in and carried me for two years. Out of the blue they wrote me a letter, suggesting I could get certain lower income jobs that paid $15 per hour. I have no idea what they were thinking—I have a mortgage to pay. I can't do anything; I get real tired just after a few hours and just want to sleep.

"Unum decided that I don't have behavior problems; their doctors say I am employable, but I've never been interviewed by any of their medical examiners—Unum should be sued for what they are doing. "I know that I don't have to convince a doctor that I am disabled. I'm a Gulf War veteran and I don't need to prove anything. All Unum has to do is read my medical records and the report from my rheumatologist.

More UNUM News
"Unum is going to have to recognize that I am disabled because the government says so. My brain isn't functioning as it should but it functions well enough to know that Unum is wrong. Unum terminated my LTD in August 2010. For months before that, they sent me a letter every month that had to be filled out by VA doctors—it is very difficult to get doctors at VA to fill out all this crap. It was harassment by Unum—who has the time? I believe that Unum was trying to wear me down—one of their bad faith tactics.

"In August I appealed, with the help of an attorney from LawyersandSettlements. As far as I know, this lawyer from Little Rock, AR, sent a letter to Unum stating that I have PTSD and fibromyalgia; he said that the brain is an organ, just like the kidney, and anyone who has psychological problems should receive benefits; there is no reason for Unum to deny me—I am hopeful that my benefits will be reinstated."

Posted by
Terry G
on March 25, 2011
The fact that unems client has liver insufficiency, or failure is NOT a result of an anxiety disorder, but is usually caused by a blood borne infection, drugs or alcohol. Please refer this person to the appropriate resource. This is the BIGGEST fault/deficiency of the VA system..
RN for 42 years.
Posted by
jeff
on March 14, 2011
Jim,
Jason has a lawyer. He probably doesn't need your legal assistance. Besides the fact that the lawyer would not have taken his case if he didn't think he had a case.
Try and remember Jason has more problems than just PTSD, as is outline above. Jason can't work and therefore is disabled

Posted by
Gulf WarVet40
on March 13, 2011
Jason, don't listen to these idiots they don't know what they're talking about. But, do read your policy. The 24 month limitation to provide benefits for mental/nervous disorders is not in every policy, and it is certainly not in mine.

I too, am a Gulf War vet suffering from PTSD and depression. My private, non-erisa policy does not have this limitation and provides benefits until I am 65, with no VA or SSDI offset. I was diagnosed with delayed onset PTSD in June, 2010 and have been receiving benefits ever since. I also receive full SSDI and 100% service-connected disability from the VA for my medical issues.

Fortunately, when I was able to work, I took out this private policy that pays me over $5000.00 a month in benefits. The insurer will send most likely send you for IME's, but it sounds like your claim is well documented.

Hey, if you have a non-erisa policy, let the insurance company challenge the claim and go to state court. Let it go for a jury trial, and seek damages for breach of contract & bad faith. It will be amusing to see how the Unum tries to justify terminating benefits to a decorated combat vet. They will immediately want to settle - refuse and call their bluff...

If you haven't already, apply for SSDI and VA compensation. Getting approved for these will help strengthen your claim. Good luck.


Posted by
Jim Bunker
on March 3, 2011
before you hit him with the PTSD you should look at the NGWRC (ngwrc.org) health care guide. it is free for for you or anyone.

He could also have CFS. It is worst then FM.

The Nerve gas can be causing a lot for problems too.

Posted by
Bad Attorney
on March 3, 2011
Pretty straightforward - no disability carrier in the world is going to pay beyond 2 years on a mental health disorder (except in VT). It's in all the contracts. The criminal in this case is the person trying to pull at your heartstring by only giving you half the facts...
Posted by
Contract Reader
on March 2, 2011
Disability contracts have a 24 month Mental/Nervous limitation which limits these types of disability for 24 months.

Read your contract; or, go after the individual who placed this contract as many times you can have the 24 month Mental/Nervous limitation removed.

This isn't Unum's fault - you're wasting your time taking this to court.