Nowhere in Jim Stanley's UnumProvident health insurance policy did it say mental illness was only covered for a maximum of 12 months.

"I couldn't work due to post traumatic stress disorder," says Stanley. "When I contacted UnumProvident about my claim, they said my original policy, which I purchased in May 2001, stated that mental illness was not covered under long term disability." 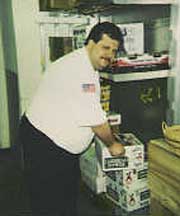 But Stanley checked his UnumProvident policy and so did his attorney. Nowhere does it mention, not even in the fine print, that mental illness is not covered under long term disability.

"I worked in loss prevention for Eckerd Drug Company. I should also mention that my insurance policy was purchased through the company and my illness was work-related. In May 2004, my depression became so bad that I was hospitalized. Three weeks later I was discharged and filed a claim with UnumProvident.

I contacted them to find out my status and all they told me was that my claim was being 'researched'. After three months I received a letter from them telling me my claim was approved but I would only be covered for 12 months. My employer told me to dispute this so I contacted their HR and UnumProvident told me that, after 12 months was up, I could file an appeal (which UnumProvident reviewed and subsequently denied).

Then I sought legal counsel through your site, LawyersandSettlements.com. I found out there are so many cases against UnumProvident, and now I added one more to a growing list.

More News
UnumProvident took millions of dollars in premiums from Eckerd, the company I worked for. As well, whenever we had term life insurance policies, they said they would 'get back to you on that'. Of course they never did. I paid my policy for over three years. Recently, I found out from other sources that UnumProvident was a half-ass insurance company anyway. I wish I knew it at the time - I contributed $60 of my own pay every two weeks and my employer put in $1.50 for every dollar I put in.

Eckerd Drug Company had 400,000 employees, from the northern tip of Canada through to the southern tip of Mexico, and we were all on the same plan. I know that we got shafted; UnumProvident sure left me out in the cold. I am still disabled and now have applied for disability through social security while waiting to see what happens with the lawsuit. I am only 37 years old; I have no idea if I can go back to work again but I sure hope so. My long term disability ran out in May 2005. Fortunately my wife works; if she didn't work we would have lost our house, all that good stuff, and be on welfare."

If you have had a long term disability claim denied, or if your claim was granted and then later terminated, you may qualify for compensation, even if the statute of limitations has expired. Please send your [Denied Disability] complaint to a lawyer for a free case evaluation.
Request Legal Help Now