Matthew Fillion served in the Navy for 18 years. Then he got an IT job at the University of Idaho, with the agreement that he would be deployed one week a month. "I'm here to serve the needs of the Navy, and that was understood the moment I was hired," says Fillion. But his employers didn't keep their end of the bargain. Instead, he was fired after military deployment.

"I began working in IT at University of Idaho this January and everything was great," says Fillion. " I brought expertise to the position and I was working full time. I was able to teach the technicians, including proper operations of test equipment. A lot of repair work of systems was in place but done incorrectly so I fixed them and they were very happy with my performance. 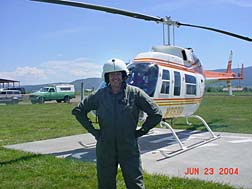 "As time went on, I got nothing but positive feedback, except for the occasional 'how inconvenient' when I did military duty now and then. Within those six months, I did my best to stay away from operations; I reduced my service time to one week per month so that I could focus on my IT job.

Before I was hired, I told management that I had to do ADT—active duty training—about one week per month. In addition, I was to be deployed for some days in July and all of August to support an operation out of Japan. They were fine with this arrangement. However, as time went on, somebody made it known that it would be really inconvenient if I left at this time. I shrugged and said, 'You've known about this for five months'.

I should tell you a bit about my reservist work: I have active reservist status—which means that I work 'strike-group operations': I work one week a month for the navy but in this role, we deploy with the active duty navy on aircraft carriers etc. Reservists with these operations do more deployment than normal reservists because we support real-world exercises and my job is on the submarine advisory team--it is our job to track our own US submarines.

Back to my university job: It is university policy for employees to receive an evaluation after their first three months of work. I didn't receive a written evaluation, just verbal feedback. For example, in May a job came up where they needed fiber optic cable installed. I installed it but they didn't have the right equipment—I did the best I could. One of the managers suggested I go to a fiber optics certification course. So I went to Spokane, took the course and got 100% on both the practical and written tests. When I got back to work I was all fired up and ready to go, I was very pro-active in my job.

Two days after I returned from the course, I was called in to the department head office. My boss was forgoing the three month evaluation because I was doing a great job. We also discussed the course and she brought up my AD training time. 'I'll be gone next month,' I told her. 'Are you taking unpaid leave?' she asked. 'No, HR at the university notified me that I qualified for military leave,' I replied.

She initially disagreed with this but later found out that I was qualified. Two weeks later, every person in my office was sent to a meeting about a new job except me. They wouldn't give me any information about the job; in fact they gave me the wrong information. I was getting more than a cold shoulder.

As well, at the university, there is no overtime, just comp time—straight pay you can take off later. All of a sudden, I was scheduled on a lot of comp time. Then my boss told me I was terminated. Why? She didn't want to talk about it! She told me that I just didn't fit in and she said there was a problem that had been going on for some time.

On June 21, 2007, they escorted me out the door. I have never dealt with anything so humiliating and unprofessional in my life. And I still shake when I think about it.

I immediately went to ESGR— employer support of the Guard and Reserve. The ESGR Ombudsmen Services Program is supposed to investigate and protect vets and reservists against discrimination etc. I thought they were going to investigate my case. I gave them some cursory information and assumed they would contact me for a full deposition. Instead they got back to me and said I was let go for 'other reasons' and not military reasons.

So I went back to the university. When they were pushed, the university personnel lied. From the Freedom of Information Act, I was able to have their reports released. They said I did 'sloppy and slow work' - the opposite of what they told me.

More News
After I was terminated, I found out that my military benefits came out of my department's funding. 'This guy is going to be sucking money out of us for military pay and leave when we need him the most,' they must have thought. 'We'd be better off to have someone when we need him, not going off to serve his country.' I can understand their rationale.

Simultaneously I was also looking for legal representation. At first I looked locally but had the same response from every law firm I contacted: they had a conflict of interest to go against the university. Then I went online and found a lawyer through your site.

I am leaving August 15th for Japan. When I get back, I will probably be sent to Iraq. But I would rather work in IT at home -it is going to be tough on my family.

The only thing I want is for the university to be accountable--they don't even follow their own policies.